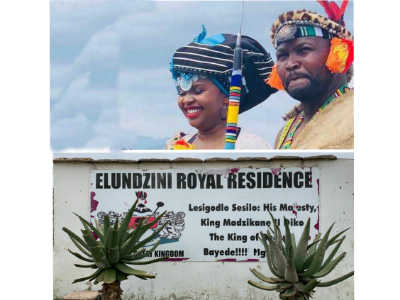 The Diko Royal House has confirmed the death of self-proclaimed King Thandisizwe Madzikane II Diko of the AmaBhaca tribe in Mount Frere in the Eastern Cape.

Diko, who is also the husband of President Cyril Ramaphosa’s spokesperson Khusela Diko, died at an East London Hospital after a short illness yesterday.

“Isizwe samaBhaca and the Royal family are still coming to terms with the loss of our beloved father, son and husband.”

Mtimde said they will make further announcements once the kingdom has finalised the arrangements for the burial.

The controversial king was still embroiled in a R140 million tender to supply personal protective equipment (PPE) in 2020.

His wife and presidential spokesperson has been placed on leave while the Hawks investigate the tender.

The controversial tender also implicated former Gauteng Health MEC Bandile Masuku and his wife Loyiso Masuku who have since lost their jobs.

While Diko claimed his involvement in business tenders would benefit the AmaBhaca people, a group known as the grandchildren of King Madzikane, the founding father of the AmaBhaca tribe said the tenders were for self-enrichment.

The Eastern Cape Department of Traditional Affairs rejected his claim that he was a king saying the AmaBhaca people were just a tribe and never a kingdom and therefore do not have a king.

Historically the AmaBhaca people are a breakaway group from the Zulu Kingdom who left the area of Stanger led by Inkosi Madzikane and settled in Mount Frere in the Eastern Cape.