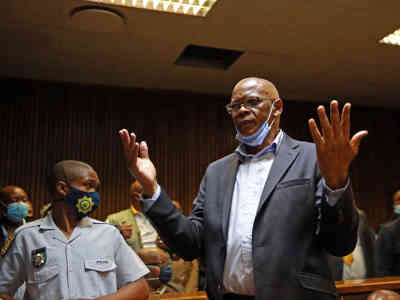 The National Prosecuting Authority (NPA) has shot down Ace Magashule’s claim that he doesn’t know what he’s being charged with.

Magashule who is due at the Bloemfontein Magistrate’s Court on Friday said he will be demanding that his case be struck off the roll if the state prosecutor can’t serve him with a charge sheet.

“To this day, I don’t know what the charges are,” the ANC secretary-general told Scrolla.Africa.

However, Sipho Ngwema, the NPA spokesman, said Magashule received his first charge sheet on his first appearance in court on November 13th.

“On Friday when he will appear again, he will receive an updated charge sheet with added charges. There will also be other co-accused brought to court that will appear alongside him,” Ngwema said.

Magashule earlier told Scrolla.Africa that  “the charge now, prosecute later” modus operandi of the Hawks and the National Prosecuting Authority can’t be allowed to continue.

“As citizens, we must speak out against this because if we don’t the status quo will remain the same,” he said.

Magashule’s court appearance comes at a time when he is fighting for his position as ANC secretary-general.

He was dealt a blow over the weekend after the ANC national executive committee agreed that leaders who were facing charges must step aside until cleared.

The NEC has given the party branches 30 days to finalise the guidelines before the policy is officially implemented.

Magashule said it was an internal matter of the ANC but added: “But I’m not worried because I know that my hands are clean.”

Asked about the factions within the ANC, he said he led one ANC which had one president.

Magashule, a strong Zuma man, is believed to be leading an anti-President Cyril Ramaphosa grouping within the ANC.

In his first court appearance in November, his supporters outside the court were already calling for him as the next party presidential candidate at the ANC’s elective conference next year.

Magashule is out on R200,000 bail facing 21 charges of corruption and fraud, or theft and money laundering. This comes from the R255 million asbestos tender that was issued during his time as premier of the Free State.