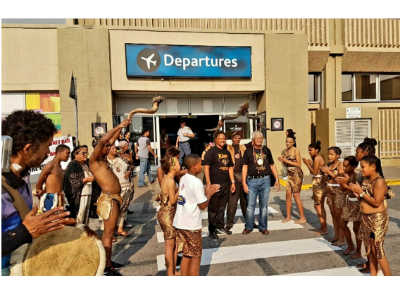 It’s bad news for headline writers who are going to have to exchange the brevity of PE for Gqeberha – and non Xhosa speakers who struggle with clicks and guttural Rs.

But most people will say it’s about time – despite the usual moans that are heard when familiar things change.

Arts and Culture Minister Nathi Mthethwa approved the name changes for airports and various Eastern Cape towns on Monday in the Government Gazette.

Port Elizabeth International Airport – once named after the architect of apartheid Hendrik Verwoerd – will now carry the name of Khoi Chief David Stuurman.

Stuurman, who was born near the Gamtoos River in the Eastern Cape in about 1773, was the Khoi chief and political activist who fought against the Dutch and British colonial administrations.

His active career as Khoi leader spanned 20 years and three Xhosa Wars fell within this period.

The small Khoisan community has been fighting for years to have the airport named after their Chief and also to be recognised in the history of this country.

Khoisan activist Christian Martin told Scrolla.Africa: “It’s the best news since the release of Nelson Mandela. Transformation has truly arrived and the Khoi and San are part of it. A seed for the rewriting of the true history of our country has been planted. At last the almost forgotten people will be remembered. Their role as the first to defend our country against colonialism will be acknowledged.”

Elizabeth of Port Elizabeth was the wife of Sir Rufane Donkin, the British Governor of the Cape Colony in 1820.

East London Airport, which was once named after Ben Schoeman, a Nationalist Party Minister of Transport, is now Chief Phalo Airport. Phalo was the Paramount Chief of the Xhosa nation between 1836 and 1875.

Uitenhage has been renamed Kariega. Maclear is Nqanqaru and King William’s Town is now Qonce. Most people will have to google to find out where those names come from.

But here’s one tidbit: King William’s Town was named after the British King William IV who reigned between 1830 and 1837.  Not even the English remember him anymore.