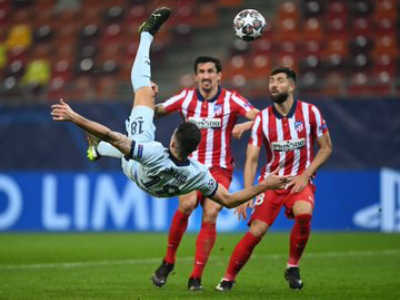 Atletico Madrid coach Diego Simeone is hopeful that his lads will overturn Chelsea’s 1-0 lead and win at Stamford Bridge on 17 March.

On Tuesday Atletico were stunned by Chelsea in the UEFA Champions League first leg.

The tie was meant to be played in Madrid but, due to travel restrictions, it was played in Bucharest. Olivier Giroud got the only goal of the game to give Chelsea a precious advantage heading into the return leg.

“We’ll be playing an opponent with speed and we will need to be able to stop it and deal with forwards like Giroud and other powerful players,” said the coach.

Atletico players were a no-show in this match and Chelsea took advantage of it. Simeone understands what he and his players need to do to beat Chelsea at their own turf.

“We need to have more of the ball and position ourselves better in attack. I trust the team,” he said.

“If you see him every day, you won’t be surprised. He’s physicality at top level. He enjoys being a professional soccer player every day. He trains like a 24-year-old,” said Tuchel.

Meanwhile in Italy, reigning champions Bayern Munich took a giant step towards the quarter-final when they humiliated Lazio by beating them 4-1 on their own turf and making things easy for them in the return leg in Germany on 17 March.

It was a landmark night for Bayern. Jamal Musiala, at 17, became the youngest English goalscorer in Champions League history.

Then Robert Lewandowski, who opened the scoring, became the Champions League’s third top scorer of all time with 72 goals. Cristiano Ronaldo is leading the records with 134 goals while Lionel Messi is second with 119.