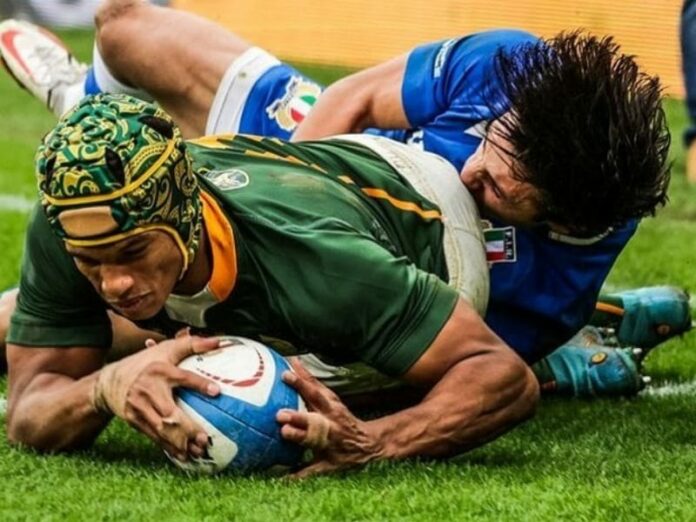 ON THE BALL: Exactly 50 years ago today, Muhammad Ali knocked down Bob Foster seven times to prove that a “good big one will always beat a good little one” – and the lovers of the Springbok should be careful when claiming a “great victory” over Italy, warns Lucky Maree.

The saying, “a good big one will always beat a good little one”, comes from professional boxing, and dates back to at least the 1950s. It was often proved in the ring when boxers from different weight divisions were regularly matched. The outcome was often a bloody affair for the smaller guy.

On 21 November 1972, exactly 50 years ago today, Bob Foster who was a giant in the light heavyweight arena, came up against “The Greatest” heavyweight, Muhammad Ali. Ali knocked Foster down no fewer than seven times before he was finally counted out in the eighth round.

On the rugby field, it is downright dangerous to draw conclusions from Italy’s massive loss (by 51 points!) to the Springboks in Genoa on Saturday. Tempting as it is, cries of “the Springboks are back!” are entirely senseless.

It is worth noting, however, that some players can deliver sparkling play when given space.

Neither of Kurt-Lee Arendse’s tries were run-ins. In both cases, he had work to do and he did it beautifully. He scored the kind of tries that would make grey-haired old geysers point at the TV, take a swig of beer, and say, “that kid knows the way to the try line!” In that sense, he reminds one of Bryan Habana, who, at his best, never let a scoring opportunity go to waste.

There was a moment late in the match on Saturday, where, for a split second, Arendse’s maturity was tested.

He had an almost clear run to the try line for his hat-trick try and he had Cobus Reinach to his left. Arendse had a better than 50-50 chance of getting the score. The boy in Arendse would go for the line (a hat-trick in a Springbok jersey is something to cherish) but Arendse the man, the team player, would pass to Reinach.

The pass was perfect, Reinach did the honours. Arendse, the man, was the first to get to him for the congratulatory hug.

Willie le Roux, for once played the kind of visionary role that he is often remembered for, but has not recently delivered. His all-round play, but specifically his passing was just that: visionary. The way he often found the right guy at the right moment was a joy to watch.

Siya Kolisi played what is called “the captain’s game”. Playing in the tramlines he looked fast, decisive and his passing was copybook stuff.

Will those and the other players be able to produce that kind of performance this coming Saturday when it won’t be a “big one beating a little one”? We have to wait and see, but for Kurt-Lee Arendse, this day will live in his memory forever.