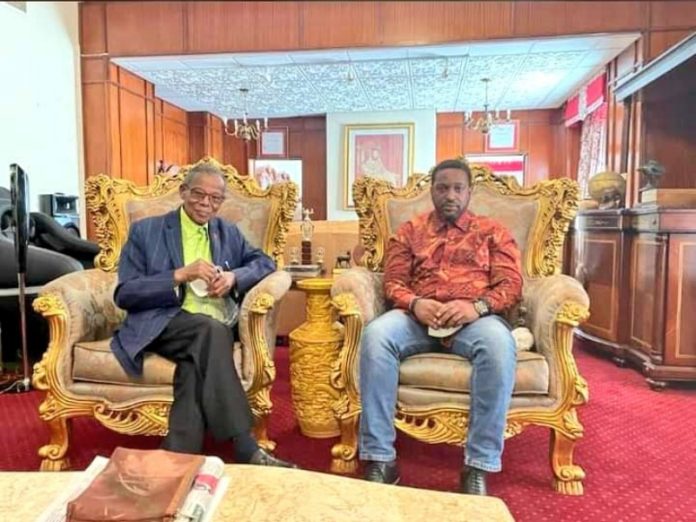 Traditional Prime Minister to the Monarch and the Zulu Nation, Prince Mangosuthu Buthelezi announced a week ago that he will continue to serve in his position but King Misuzulu has other plans.

But according to the sources in the Royal Family, the name of Prince Mthokozisi Mazwikazulu Ntombela has emerged as the preferred incoming Traditional Prime Minister to the Monarch.

On Tuesday, a Royal family member Thami Zulu posted Ntombela’s photo on Facebook  with the caption: “History has no blank pages. A man will follow his name. Mthokozisi Mazwikazulu”.

Most Royal family members who spoke on condition of anonymity say Prince Mthokozisi is the one to take over from Buthelezi who has served the Zulu Nation for 73 years.

“Remember that Prince Ntombela is also the son of King Zwelithini ‘s sister and Prince Mangosuthu Buthelezi who is the current Traditional Prime Minister is the son of Princess Magogo who was a sister to King Bhekuzulu kaNyangayezizwe. So it is not going to be a new thing for King Misuzulu to appoint his cousin,” said a source.

Another source revealed that the new Traditional Prime Minister might be appointed after the Coronation of King Misuzulu.

“It is his prerogative as the reigning king to appoint his own Traditional Prime Minister. Prince Mthokozisi is the trusted one to the King and he commands a lot of respect. Look how he delivered his speech at the Memorial of the Late Queen Regent Shiyiwe Mantfombi MaDlamini Zulu. He was asked by King Misuzulu to make a closing speech on behalf of the family and he did a sterling job. Everyone was so impressed,” said another source.

Whenever the Royal Family members speak to Prince Mthokozisi, they now call him “Ndunankulu kaZulu.”

He would laugh it off.

During the Durban press conference, Buthelezi said the late Queen Regent Mantfombi MaDlamini Zulu stated in her will that he should continue to Chair the Royal traditional Council.

Attempts to get hold of Prince Mthokozisi Mazwikazulu were unsuccessful.