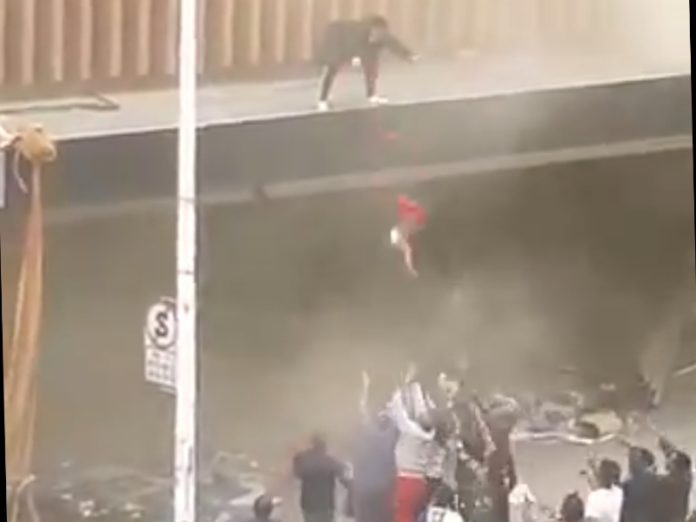 The incident has become a symbol of hope after the looting, violence and death that consumed Mzansi.

But, the mother who threw her baby from a burning building to save her life, says she is depressed from flashbacks and the criticism of her decision.

When her building went up in flames, trapping her and her baby on the balcony, Naledi Manyoni’s motherly instincts kicked in. She threw the toddler to people below who luckily caught the toddler, who survived unharmed.

Two-year-old Melokuhle was thrown from the third floor of the City Life Building, on the corner of Smith and Field streets.

Naledi, 26, from Folweni, south of Durban, made global headlines last week after the incident.

Although she is grateful that her daughter was saved, the mother told Scrolla.Africa she is suffering from stress because of the incident.

“There are people who criticise me for throwing my daughter from the burning building. I am being called an irresponsible mother.

“I am deeply hurt by such accusations because all I wanted was to save the life of my daughter and the people who were on the ground gave me hope by encouraging me to throw her at them. I was frustrated and scared,” she said.

Naledi and her boyfriend, Simthembile Matomani, 36, had to sleep in their car because they were scared to go back to their apartment.

The incident has touched many people around the world, including the Nelson Mandela Foundation who have since called a meeting with Naledi and her daughter.

Before Naledi had to save her daughter’s life, her boyfriend had gone out to fill up their car with petrol.

“When I came back I saw a group of people screaming that a baby was thrown at them. Little did I know that the person was my daughter. Since then we haven’t received any counselling,” said Simthembile.

He wants to move out of the flat and get a safe place with his kids and their mother.

Meanwhile, Simthembile’s 16-year-old son, who was with his stepmother during the incident, managed to jump from the burning building to a robot pole, which he used to get on the ground.