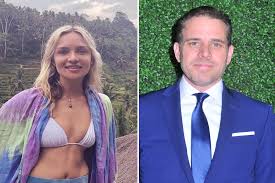 Melissa went to King David school in Victory Park, Johannesburg. Here she is in the King David 2004 yearbook.

Press reports in America and Britain say she has gone on to become a documentary filmmaker.

According to media reports she met Hunter Biden in 2019 and they got married soon after in Los Angeles.

The couple got matching tattoos of the word “Shalom,” or “peace,” in Hebrew, on their biceps.

Hunter Biden, the second and only surviving son of Joe Biden, was the subject of a massive smear campaign by President Donald Trump’s Republican Party during the election campaign.

Hunter has struggled with drug addiction and a failed marriage.

Joe Biden reportedly told Melissa: “Thank you for giving my son the courage to love again.”

Biden’s other son Beau died of brain cancer four years ago and his first wife and eldest daughter died in a car crash during the 1970s.