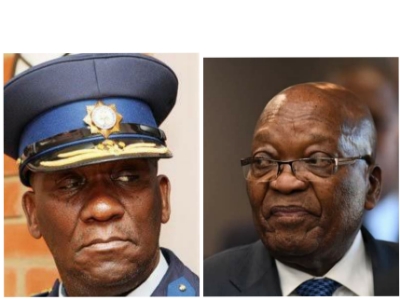 The news of Cele’s visit to Zuma’s home was announced by his spokesperson Liradzu Themba this morning.

It is unclear whether Cele will be visiting Zuma in his capacity as a minister or as a member of the ANC’s national executive committee.

His visit comes amid Zuma’s defiance of the Constitutional Court that ordered him to appear at the state capture commission of inquiry this week.

Since Zuma is now facing a charge of contempt of court, it is highly likely that the police would be forced to make a televised arrest of the former president.

Zuma loyalists including a group wearing military regalia claiming to be former MK combatants have camped outside his home, with the aim of blocking any attempt to arrest him.

Zuma attacked the judiciary earlier this week, saying it is targeting him, vowing to go to jail rather than present himself at the commission, chaired by Deputy Chief Justice Raymond Zondo.

Zuma is also set to appear in the Pietermaritzburg High Court on Tuesday for the corruption, fraud and money laundering charges for his alleged involvement in the controversial Arms Deal in the late 1990s.

Cele was among the senior ANC leaders who had openly called for Zuma to step down, which he ultimately did in 2018.

He had also openly campaigned for Cyril Ramaphosa to be elected as the party president ahead of the party’s 2017 elective conference, which he won.

Zuma’s brother Khanya said everybody was welcomed in Nkandla whether they are enemies or allies of the former president.

“Our doors are opened and everybody is welcomed here. We are a loving family,” he said.

Many prominent people including EFF leader Julius Malema have visited the beleaguered Zuma at his Nkandla homestead.

Cele is expected to brief the media after his meeting with Zuma.