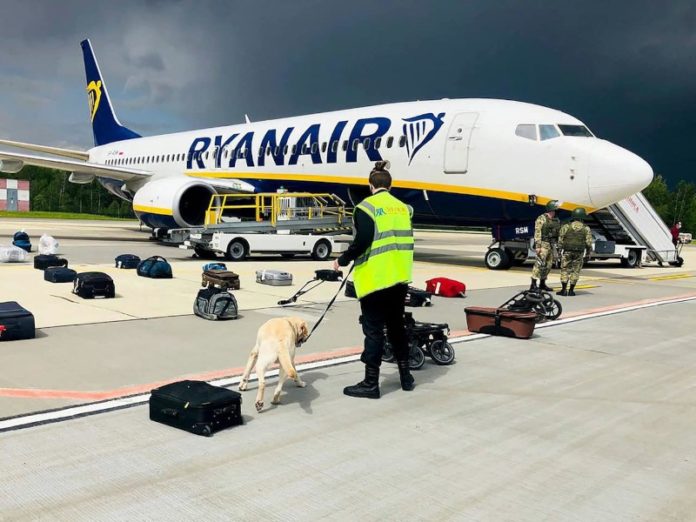 In what has been described in some quarters as a hijacking, Belarusian president, Alexander Lukashenko, personally ordered a Ryanair passenger aircraft to land in Minsk, Belarus.

When the plane landed, journalist Roman Protasevich was arrested along with his girlfriend, Sofia Sapega.

“The death penalty awaits me here,” said Protasevich, a vocal critic of the Belarusian government, as he was escorted off the plane.

According to The Sun newspaper, one account said he was distraught and shivering uncontrollably as he was led away.

The plane had reportedly almost arrived in Lithuania from Greece when its pilot received a report from Belarusian air traffic control of an alleged bomb threat.

In an act described as “air piracy,” an armed fighter jet was sent to escort the plane to Minsk.

After the plane landed, sniffer dogs conducted a bomb sweep but found no evidence of explosives. International onlookers have accused Belarusian authorities of making up a false bomb threat in order to arrest Protasevich.

The government of Lithuania said in a statement: “It is an unprecedented attack against the international community: A civilian plane and its passengers have been hijacked by military force.”

Michael O’Leary, CEO of Ryanair said in an interview that he believes Belarusian security agents were travelling on board the flight as well.

According to a statement released by Lukashenko’s press office, the president gave an “unequivocal order” to “make the plane do a U-turn and land” in Minsk.

After spending over seven hours in Minsk the plane took off and landed with all the other passengers on board in Vilnius, the capital of Lithuania.