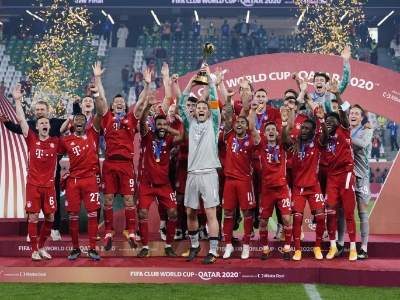 Bayern Munich became the first team since Barcelona in 2009 to win all domestic and European titles they competed for in a single year.

The European champions beat Tigers UANL of Mexico 1-0 in the final at Education City Stadium in Qatar. But it only took them two matches to capture the world title.

The Germans first beat Pitso Mosimane’s Al Ahly 2-0 on Monday to reach the final. But the competition’s format has received a lot of criticism – especially the way European and South American teams are allowed to join the tournament at a later stage.

The current format of the tournament involves seven teams competing for the title. It’s the winners of that year in Asia, Africa, North America, South America, Oceania and Europe, along with the host nation’s national champions.

They all participate in a straight knock-out tournament. The host nation’s national champions contest a play-off against the Oceania champions.

The winner joins the champions of Asia, Africa and North America in the quarter-finals. The quarter-final winners go on to face the European and South American champions, who enter at the semi-final stage, for a place in the final.

Before the tournament Mosimane said: “It is unfair to other teams to see others being prioritised. European teams get special treatment in this competition and it’s not fair.”

It took Bayern an hour to find a winning goal that was scored by Benjamin Pavard. But the 2020 World player of the year, Robert Lewandowski, yet again received another big award in this competition.

The Polish striker was awarded with the player of the tournament after getting two man of the matches against Ahly and Tigers.

“We were determined to win,” said a jubilant Lewandowski at Fifa.com. “At half-time I said that we need to get crosses into the box, and that’s how the goal arrived. It’s fantastic.”