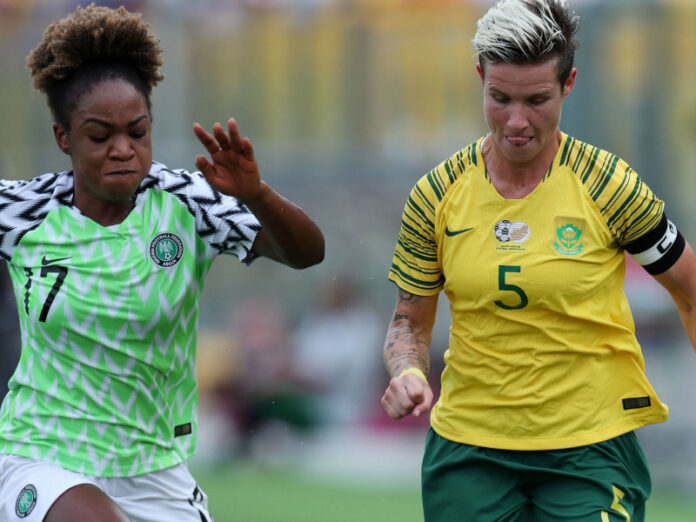 South African women’s football team, Banyana Banyana, has been drawn in the same group as Nigeria at this year’s Women’s Africa Cup of Nation (Awcon), a repeat of the 2018 final.

The draw put Banyana Banyana with the side that defeated them 4-3 on penalties in the last edition of the tournament.

The 14th edition of Awcon will be held in Morocco from 2 July to 23 July this year.

South Africa is yet to win the African showpiece and reaching the final in Ghana four years ago gave Banyana their best opportunity to make history.

However, it was not meant to be as South Africa suffered a heartbreaking defeat at the hands of the West Africans.

Now, four years later, a much-improved Banyana Banyana will be out to prove just how much they have progressed since that final.

The Awcon is not just important as it is a chance to lift a continental trophy, but the four semi-finalists automatically qualify for the 2023 World Cup.

Awcon is scheduled to take place every two years, but the 2020 edition was cancelled due to Covid-19 restrictions.

This year’s showpiece will also be the first time that it has extended to 12 teams, from the original eight sides previously.

While South Africa have improved since the 2018 final, Nigeria remain superpowers of the women’s game, winning the previous three Awcon tournaments as well as being record nine-time champions.

They will also be the only side at the tournament that have lifted the trophy. Banyana will be hoping to change that in Morocco when the competition kicks off in July.

South Africa are the third best ranked women’s side in Africa, only behind Cameroon and leaders Nigeria.