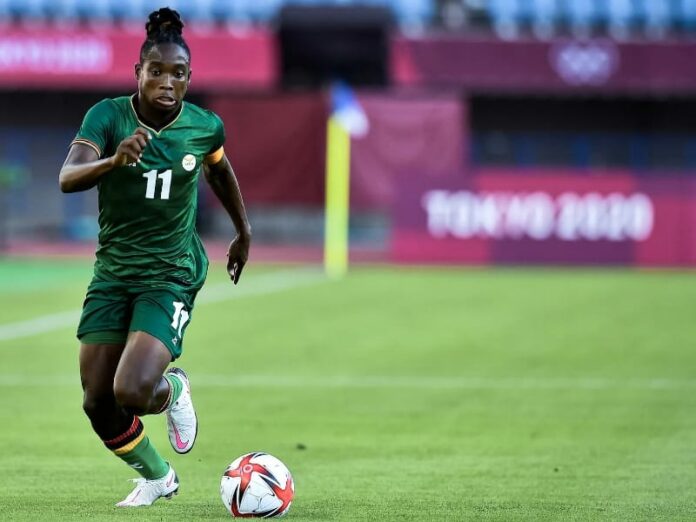 Extra-time: Menzi Magubane voices his disappointment at the decision to ban Barbra Banda from the Women’s Africa Cup of Nations.

The news that Zambian star striker Barbra Banda will not be representing her country at the Women’s African Cup of Nations (Afcon) is deeply saddening.

The 22-year-old was forced to withdraw from Zambia’s squad after her blood tests found an excessively high level of testosterone.

This is according to Spanish sports outlet Mundo Deportivo, which also reported that she was dropped for having a “manly body”.

Banda along with all of Zambia are well in their right to feel hard done by the Confederation of African Football (CAF).

At the Olympics, Banda made history by becoming the first female player to score back-to-back hat-tricks in consecutive games, scoring six goals before they were eliminated in the group stages.

Zambia banked on Banda to help them to at least reach the last four and qualify for the 2023 Fifa Women’s World Cup.

What surprised many is how CAF president Patrice Motsepe didn’t seem to know anything about Banda’s situation.

He was asked why a woman who had been allowed to compete in Fifa fixtures and was cleared by the International Olympic Committee (IOC) to play in Tokyo was suddenly ineligible.

Motsepe’s reply was astonishing; he had no idea that a country’s star striker had been ejected from the tournament.

“They’ll advise me on that because I went to bed at four o’clock in the morning, and I had to be up very early for various other issues,” he told the journalist.

Banda’s situation shares similarities with that of South Africa’s Caster Semenya, who is currently unable to compete in a number of distances due to the World Athletics regulations for athletes with differences of sex development.

The 31-year-old has battled against these regulations since she burst onto the scene as an 18-year-old at the 2009 World Championships.

It remains to be seen what will happen to Banda’s hitherto promising international career. Is it over or will she too have to take testosterone-reducing medication in order to compete as Semenya was forced to do in 2011?

One thing is for sure, she has the potential to become one of the country’s greatest ever players, and squandering that is not a matter that can be taken lightly.