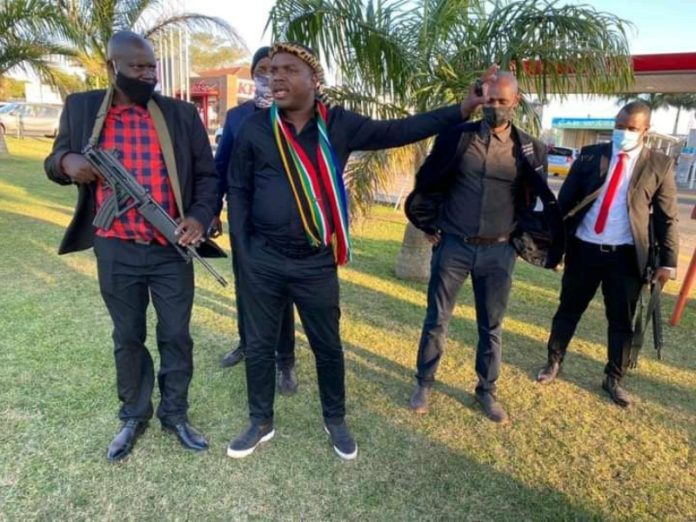 Former Ukhozi FM DJ Ngizwe Mchunu has made a U-turn on the controversial slogan “Azikhale”, as he wants to be paid royalties for its use on the new Big Brother Mzansi advertisement.

Following his arrest for inciting violence during the July unrest, Mchunu distanced himself from the slogan and described it as a rural expression which is used widely.

“Azikhale”, said to mean either “Let’s do it” or “Bring it on”, became famous when looting and unrest broke out last July following the arrest of former President Jacob Zuma.

On Monday however, Mchunu, accompanied by the former EFF Fees Must Fall Activist Bonginkosi Khanyile, stormed the offices of Multichoice without making an appointment.

Mchunu allegedly demanded that the company pay him for using “Azikhale” on its popular Big Brother Mzansi advert.

The two fought with security guards, demanding to be let inside to talk to the TV management.

Mchunu later told Scrolla.Africa that they met with the Multichoice management and the negotiations seem to be positive.

“Anyone using ‘Azikhale’ for profit will have to pay me the royalties because I went to jail for this slogan and I am still attending the case,” said Mchunu.

“As we speak, the Multichoice management have agreed to have another meeting with me and they are still looking at this matter as per my demands.”

Mchunu is due back in court on 16 March.

He said he is busy with his lawyers drafting the document that will make sure that the slogan is his property rights and no one should commercially use it without his consent.

The National Prosecution Authority described the slogan as a call to violence and has argued that it was used to encourage the looting which took place in Gauteng and KwaZulu-Natal.

Upwards of 337 people were killed during the July unrest.

Parties across the political spectrum adopted the slogan as a campaign tool to gain votes during the local government elections in November.