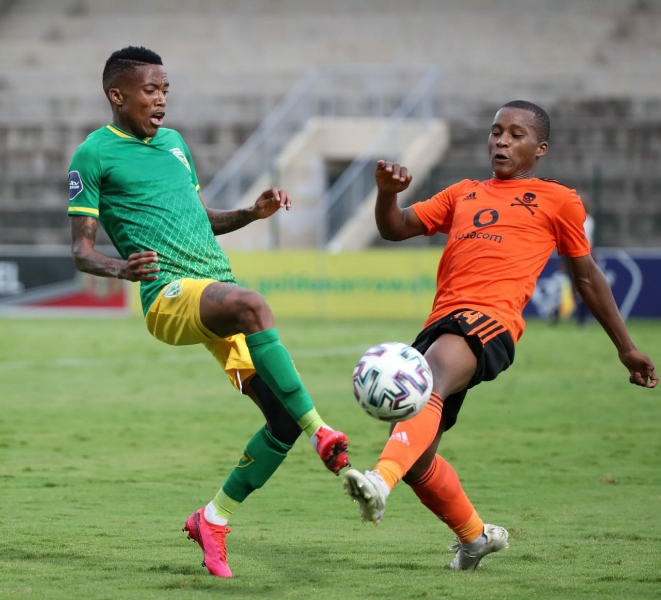 Golden Arrows made history as they stunned Orlando Pirates in a dramatic DStv Premiership match on Tuesday night.

A 2-0 win at the Sugar Rax Xulu Stadium in Durban was the biggest victory for Abafana Bes’thende over Bucs.

The Arrows have only ever beaten the Pirates by a single goal. Three points saw the winners dislodge the losers and move into fourth place – Bucs have now dropped a place to fifth.

Moruping seemed not to realise that there were two balls on the pitch when Pule Mmodi scored from Michael Gumede’s quick throw in in the 41st minute.

But there was no controversy surrounding Mmodi’s winning goal, which came in the second half. Pirates were caught on the counter attack after committing men forward for an equaliser.

Though before Mmodi put the game to bed, Pirates had a golden opportunity to equalise with a penalty. But Thembinkosi Lorch sent it flying over the bar. Only seven minutes later Mmodi completed his brace.

“We had opportunities to score but they were not a lot. If you don’t score these things happen. You lose the game,” said Bucs coach Josef Zinnbauer.

“The opponents deserve to win. This defeat leaves me frustrated. With Lorch, we know he can score penalties but today he missed. But these things happen.”

Arrows have two games in hand over Pirates, and it was their second consecutive win after losing their first of the season seven days ago.

“We planned to hit them on a counter because we knew they would come at us. We could have scored more goals but let’s not be greedy. Who will give you three points against Pirates,” said Arrows coach Mandla Ncikazi.

In an earlier match on Tuesday, AmaZulu beat Bloemfontein Celtic in an entertaining seven-goal thriller. Usuthu won the match 4-3, making it their third victory in a row.

Benni McCarthy’s lads made life difficult for themselves after allowing Celtic to come from 3-1 down to equalise a minute before the final whistle. AmaZulu had to dig deep to get a winning goal.

Thapelo Nyongo’s brilliant free-kick in added time broke Celtic hearts just when they thought they were taking a point to Bloemfontein. Augustine Mulenga gave the home team the advantage in 12 minutes before Harris Tchilimbou equalised after 29th minutes.

Siyethamba Sithebe and Nyongo made it two and three respectively for Usuthu. Victor Letsoalo pulled one back for Celtic before Tchilimbou equalised again for the visitors.

Nyongo scored the dramatic winning goal with the last kick of the match.