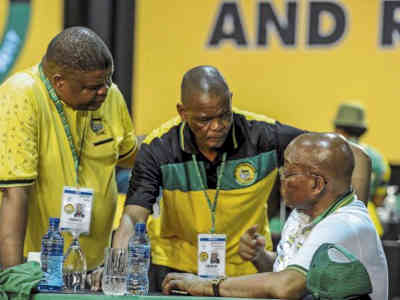 Ace Magashule might walk into this weekend’s ANC special national executive committee (NEC) meeting as the secretary-general and leave as an ordinary member of the ruling party.

This is after the ANC integrity commission reportedly gave a green light for him to step aside amid the corruption and fraud charges he faced.

Despite his powerful position hanging in the balance, Magashule has dared his detractors to “bring it on”.

“I am not prepared to talk about this now suffice to say that it is only the branches that can remove me. I don’t know how many times I have said this.”

The NEC, which is the highest decision-making body, gave thumbs up to the step aside policy but sent it to the branches last month for approval before it was implemented.

A defiant Magashule told Scrolla.Africa that he was unshaken.

“It stuns me as to why people are obsessed with me stepping aside as the SG. Let us all wait for the branches to make their inputs before people get excited about my removal,” he said.

Magashule would not confirm or deny that there was an NEC meeting expected on Sunday.

Scrolla.Africa understands that the branches had not yet approved or rejected the step aside policy.

At the centre of Magashule’s legal woes was the R255 million asbestos tender issued during his time as the premier of the Free State.

He appeared at the Bloemfontein Magistrate’s Court last month, and the case was postponed to 11 August for pretrial hearings.

Magashule said he would not comment about the merit of the charges against him until the matter was finalised in court.

“There’s nothing for me to say at this point about this case. I have to clear my name before a court of law, not that of public opinion.”

He laughed when asked whether he had ambitions to become the next president of the ANC and by implication, of the country.

ANC spokesperson Pule Mabe could not be reached for comment.