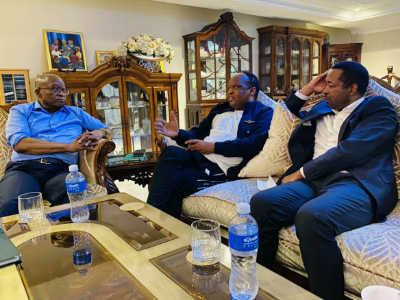 Former president Jacob Zuma was forced to have a sit down with his legal team after meeting the ANC top brass.

During a virtual meeting on Monday, the ANC top six advised Zuma against undermining the Constitutional Court and pushing the country towards a political standoff.

Zuma promised to consider the advice of the ANC bosses and later discussed his strategy with his advocate Muzi Sikhakhane.

ANC secretary general Ace Magashule said: “It was indeed a good meeting, very constructive and positive to both the country and the African National Congress leadership and its members.”

Magashule said the top six, led by President Cyril Ramaphosa, have agreed to give Zuma “space” to consult his lawyers.

“Comrade Zuma made a very extensive presentation on what has prompted his decision not to appear before what you term the Zondo commission.”

Magashule said Zuma told them that he believed that he had been subjected to unfair persecution and prosecution for over two decades.

At the centre of the meeting was Zuma’s defiance of the Constitutional Court, telling him to appear before the State Capture Commission of Inquiry, chaired by Deputy Chief Justice Raymond Zondo.

Zuma ditched the commission and dared law-enforcement to arrest him.

Scrolla.Africa understands that the ANC sought legal counsel, which advised that the contempt of court charge would fall off if Zuma appeared before the Zondo commission.

Zondo wants Zuma to be sentenced to two years imprisonment for defying the Constitutional Court order.

Zuma missed Monday’s deadline to file his response to the commission’s request that he be jailed for contempt of court – in which they argued it would set a bad precedent if the country’s former president refused a court order.

Already another witness subpoenaed by the Zondo commission – controversial businessman Auswell Mashaba – for refusing to appear at the commission, prompting Zondo to speculate if it was caused by Zuma’s refusal.

Mashaba ran Swifambo Rail, which won a R3.5 billion contract from the Passenger Rail Agency of South Africa (Prasa) for new trains. This 2013 contract resulted in trains “too tall” trains for South Africa’s existing rail network, and was overturned by a 2017 court order that found it was corrupt.

Similarly, argues the Zondo commission, justice will be harmed if Zuma isn’t punished for refusing a lawful court order.