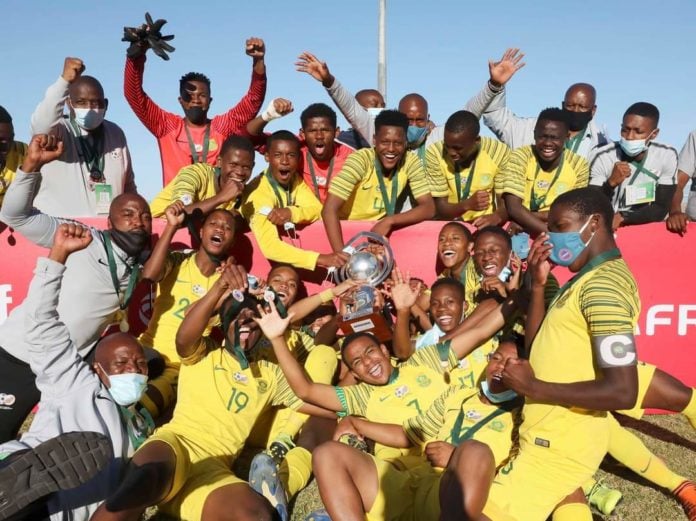 South Africa’s U17 team won the Champions of Cosafa Cup 2020 by beating Zambia 4-2 on penalties following a 1-1 draw in regulation time on Sunday afternoon at Gelvandale, Nelson Mandela Bay.

The Golden boot winner Joseph Banda converted the opening goal for Zambia from the penalty spot after Dopholo handled the ball in the box inside two minutes of the match.

Amajimbos recovered and got rewarded in the 15th minute with a penalty.  Thabang Mahlangu stepped up and converted from the penalty spot to level matters.

The two teams couldn’t be separated from regulation time and the tie had to be decided by penalty kicks.

It was a sweet revenge for Amajimbos, as the team is known, following the defeat they suffered against Zambia in the group stages.

On the road to the final South Africa started the campaign with a draw against Malawi. In the second game Amajimbos edged out Angola. Coach Vela Khumalo’s team suffered their only defeat in the tournament against Zambia and finished second on the final log standing.

Amajimbos and Zambia both qualified for Total U-17 African Cup Of Nations to be organised in Morocco. The winner, runners up and third/fourth playoffs winner at the AFCON will qualify for the FIFA World Cup to be played in Peru.

Amajimbos coach Khumalo told Scrolla.africa that it is a great achievement to win the Cosafa cup and “the big picture is to see these boys play at the World Cup.

“It’s a great feeling under the circumstances. Remember amateur football just opened recently, the boys did their best.