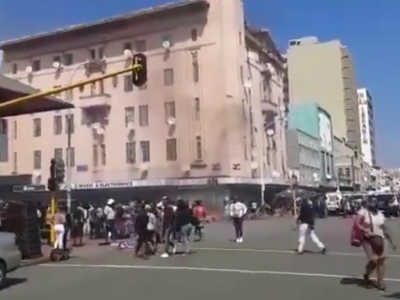 Charles Mwamba fled from war in the Democratic Republic Congo in 2002 and came to South Africa.

But once again he fears for his life and the lives of his family members.

Mwamba narrowly escaped when foreign nationals were attacked in Durban on Monday by people who are believed to be members of the MK Veterans Association. Two foreigners sustained serious injuries.

This comes just two months after a similar attack allegedly also by members of MKMVA –  although MKMVA leader in KZN, Zibuse Cele denied that their members were behind the attacks.

For Mwamba, running for safety yesterday, reminded him of ducking bullets in Congo.

He lost two brothers during the Congo wars.

“It pains me that this country is treating us like this. This is the same country I call my second home,” he said.

Mwamba owns a cellphone repair shop and lives with his wife, Precious, and three children between the ages of six to 15, all born in South Africa. He said he is in the country legally.

“I have nowhere else to go now. I had thought that I would live the rest of my life in South Africa,” he said.

“I plead with my South African brother and sisters to treat us as human beings. We are all Africans. If we have done something wrong, let’s sit down and resolve issues,” he said.

The chairperson of the Somali Community Board, Amir Sheikh, accused the government of looking the other way when they are being attacked.

“The ANC must condemn such attacks. We sheltered many ANC leaders in our country when they were fighting for freedom,” he said.

Many foreign shops were closed on Tuesday after the attacks.

The spokesperson of the ANC-governed eThekwini Municipality, Msawakhe Mayisela, also condemned the attacks. “We regard all those who trade legally in the city as equal citizens of our city,” said Mayisela.