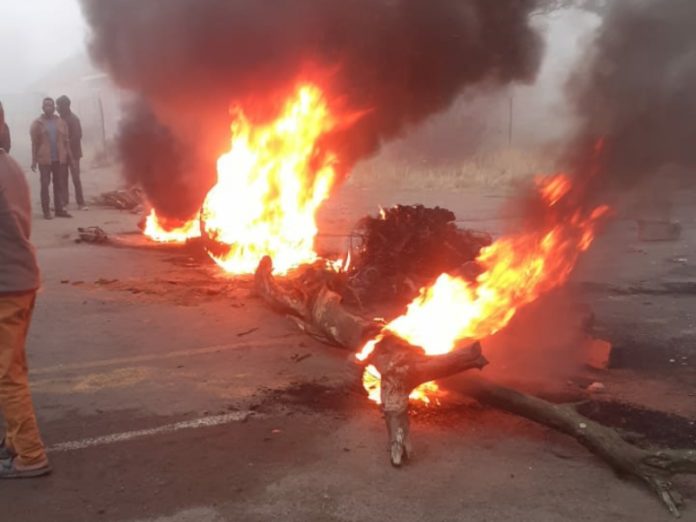 With petrol prices increasing all the time, the Nquthu Taxi Owners Association saw fit to increase their local fares by R2.

But their passengers in Northern KwaZulu-Natal would not have any of it.

The communities broke the Level 4 regulations and staged a protest which brought the rural town economy to a stand still.

The protest started on Monday after the Nquthu Taxi Owners Association announced on 1 July  that the taxi fare will increase by R2.

On Tuesday communities under Chief Molefe blockaded the main road from Nquthu to Newcastle, Vryheid and Gauteng with rocks and tree trunks.

The protest affected many activities including emergency vehicles and other essential services.

The route – which is the main route for economic activities of the town – had to be closed as communities were burning tyres and barricading roads to express their anger.

Rapelang Motloung told Scrolla.Africa that taxi owners took the decision to increase the taxi fare without any consultation with affected communities.

“We are sinking in poverty and some of us try by all means to use every cent we have to travel to Nquthu town to seek employment using taxis,” said Motloung. “We were paying R18 but now they want us to pay R20. How are we going to get that money because most of us are not working. What they did is totally unfair. The worst part is that everyone knows that Nquthu is the most poverty-stricken rural town in KZN.”

Nquthu resident Puseletso Molefe said the protest affected her badly because she was unable to go to work because protesters would not allow taxis or any vehicles to move.

Taxi association Santaco spokesperson Sfiso Shangase said that they consulted with their passengers before increasing the taxi fare.

“We are surprised by these protests because we followed every process to consult with our stakeholders. We did a thorough research by checking the economic volume of Nquthu and different areas we are operating in. We then reached a decision that we will increase the fare,” he said.