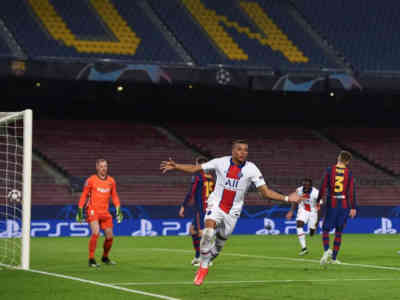 In December they got a 3-0 hiding from Juventus and things went from bad to worse as they were humbled 4-1 by Paris Saint-Germain (PSG) on Tuesday.

With Neymar out with an injury, Lionel Messi and company thought the night at Camp Nou would be theirs after Messi scored a penalty.

The 22-year-old terrorised Barca’s defence and scored his first hat-trick in the competition. He scored in the 32nd minutes to equalise for the visitors before putting them ahead 33 minutes later.

Forward Moise Kean made it 3-1, but Mbappe got his third for the night five minutes before the final whistle.

Speaking about Mbappe, PSG coach Mauricio Pochettino said: “Before the match, he asked me how many times I had won at Camp Nou. I told him once. He said we are going to win a second time.”

This wasn’t the first time they scored four goals against Barcelona. In Paris in 2017 they won 4-0 in the round of 16 first leg. The return leg in Camp Nou went down in the history books of the competition.

Barcelona won 6-1 with Neymar scoring twice to help his team win the tie 6-5, making it the largest comeback in Champions League history.

On 10 March these two will face off once more in Paris in the second leg and this tie is far from over. A 4-1 lead doesn’t guarantee PSG anything.

Meanwhile in Germany, Liverpool beat RB Leipzig 2-0 to make their job easy when they meet again at Anfield for the second leg on 10 March.