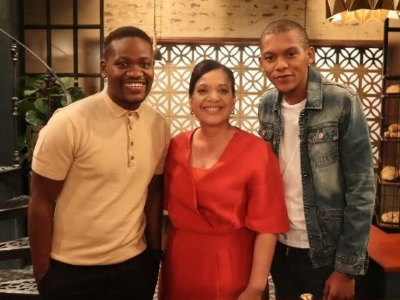 In an exclusive interview with Scrolla Africa, Clement Maosa said the crossover episodes ​will help to build social cohesion in the country.

“First of all, I have to applaud the SABC management for coming up with such an amazing idea. For the longest time, I didn’t know that there are millions of similarities between the Afrikaans and all-black cultures.”

The actor hinted at themes of racial tension, but had to check himself before he gave away any spoilers.

“Without giving away too much, for me, I think unconditional respect for everyone regardless of their race is one​ of​ other things I learned as I was shooting the show.’’

While talking about shooting the three episodes, Maosa said, “It was also amazing to see the actors who used to be on set now being the director. Their career growth showed me that one doesn’t need to limit themselves.”

He also said that he has long been a fan of the artistic potential of crossover shows, explaining, “Combining shows is a great idea as this helps the viewers understand that shows can work together to create a bigger picture or world so to speak.’’

Maosa refused to reveal the details of the upcoming three crossovers. All he could say was that it plays out as a production company filming scenes featuring Kat and Kwaito in Beleef, an affluent restaurant in Hillside 7de Laan.