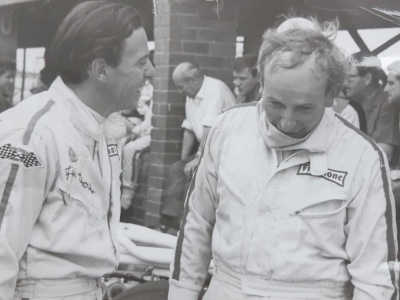 The win was not unexpected. In fact it was much anticipated.

Clark was the number one driver for what would today be described as a dream team. Clark, who to this day is considered by many to be the best ever, was behind the wheel of a Lotus 49.

The car was designed by Colin Chapman, perhaps the most famous of all race car designers, around the Ford Cosworth DFV engine. The engine produced enormous power and it was also lighter and smaller in size than the others. It was the first race car that did not have a frame with the engine being part of the structure.

So, no, the win in the grand prix, with team mate Graham Hill in second place, was not unexpected.

What was unexpected was that Clark’s historic win was also his last.

A month later, on 7 April 1968, Clark took part in a Formula 2 race at the Hockenheim circuit in Germany on an overcast day with soft drizzle. The track, much more suited to pre-World War II front-engined race cars with skinny tyres, was virtually an oval, with very long sweeping curves where modern race cars were at full throttle most of the lap.

It was on one of those sweeps, while Clark was running in mid-pack, that something went wrong with the left rear of the car. Whether it was a deflating tyre, suspension failure or driver error, has never been conclusively established.

Whatever the cause, the car shot off the circuit and into the trees at 240kph. The car was a mangled mess and Clark was killed instantly at the age of 32.

He was buried in the village of Chirnside in Berwickshire, Scotland. His tombstone describes him first as a farmer and then as a World Champion which was apparently his wish.