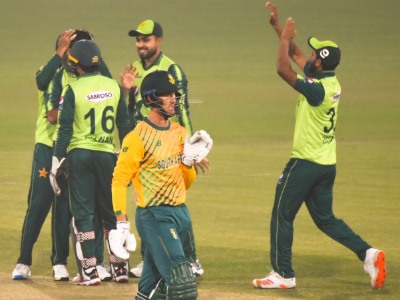 South Africa’s first overs at the crease was nothing short of a bloodbath. The first wicket went down for 10 runs, then wickets went down at 24, 41, 46, 46 and with South Africa at 6 for 48, the match was all but over and the series lost.

But then, enter David Miller. Not even a cheesy scriptwriter for a Sylvester Stallone action movie could have dreamt up the David Miller-scenario.

In itself his 85 off 45 balls with four sixes in the last over, was already spectacular. Given the circumstances, it will go down as one of the most inspired knocks in South African T20 history.

With Pakistan at the crease, it soon seemed that Miller’s performance would be too little too late but then Shamsi took Rizwan (42), Ali (15) and Talat (5) in quick succession and in his final over took Asif Ali for 7. A special performance and a slight glimmer of hope.

But with two overs to go, Pakistan needed 16 runs and only a miracle could save South Africa. But when Phehlukwayo conceded six runs off his first ball, it was all over – bar the shouting.

Pakistan wins the T20 2-1 and the five-day tests 2-0. They would not be unhappy with the result.