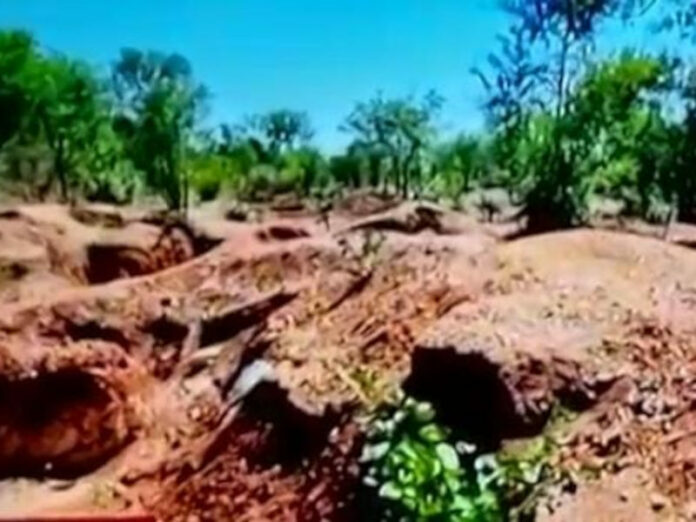 Mines often bring development and employment opportunities in communities and the arrival of gold for the rural Muyexe village outside Giyani was due to do just that.

But in this village it brought along destruction to their agriculture as the search for gold has left big holes in the communal fields. Meanwhile, deforestation has put strain on livestock farmers whose grazing land has been disturbed.

The Geo Science Council of South Africa last year announced they found gold reserves at the village. That is when illegal miners started flocking there.

Local resident John Mahosi said they were surprised to see so many unfamiliar faces arriving in their area last year.

“The group arrived with their sophisticated machinery from far and wide with some from as far as Lesotho and KwaZulu-Natal and started their mining operations without our knowledge,” he said.

Mahosi added that they thought the new arrivals were from legitimate miners who were going to develop the area.

“That was not to be as they did everything themselves and no locals were employed.

We suffered great losses as a community, our fields were severely violated and what is left are big holes and farming that we rely on has been disturbed,” he added.

Eddie Hlungwani, spokesperson for the local Chief Simon Muyexe, said the illegal miners have only brought destruction to the village.

“These people are the only ones benefiting from our resources while we watch. Hard cash is changing hands on a daily basis and the money is not taxed. Go and see what they have done to our fields,” said Hlungwani.

“We tried reporting this to the police and we are not getting the results that we need as a community as they continue with their illegal activity,” he said.

Hlungwani added they were pleading with the government to formalise mining in the area, where a licensed miner would operate legally and employ locals benefiting the community, before the reserves are depleted by the illegal zamazamas.

Limpopo Hawks spokesperson Captain Matimba Maluleke confirmed illegal mining activities are rife in the province. He said they are doing something to stop these illegal operations.

“We have been to the area and we confiscated expensive mining equipment but unfortunately no one was arrested during the operation,” he said.

“We will continue with such operations to ensure that illegal mining stops in this province.”