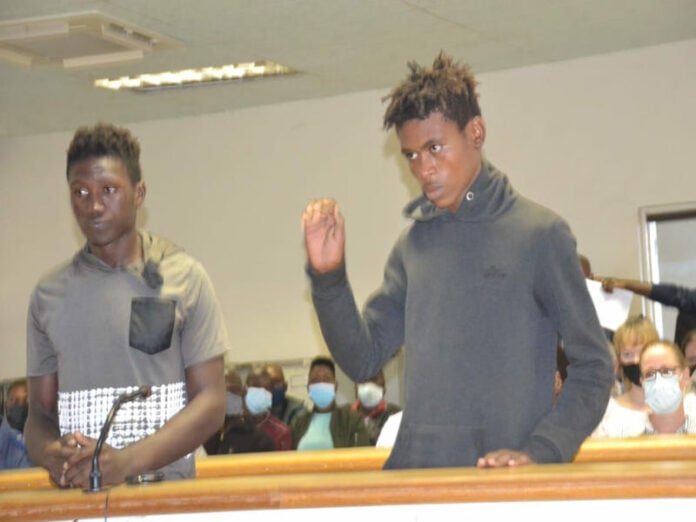 Two men aged 18 and 20 have appeared in court for the murder of an elderly couple in Limpopo after police traced a phone left at the scene of the crime.

The two suspects are alleged to have robbed the home of Andries Nicolas Louis and Ina Cloete, aged 71 and 74 respectively, last Wednesday before tying them up in their farmhouse and burning it down.

Mukhethwa Goodman Magoma, 20, and Engetelo Advance Sambo, 18,  allegedly robbed jewellery, firearms and other valuables from the couple’s home in Levubu outside Louis Trichardt.

The loot was already loaded into the couple’s bakkie when a passerby disturbed them.

The two suspects panicked but before fleeing the crime scene, they set the couple’s farmhouse on fire with Louis and Cloete tied up inside.

The elderly couple’s bodies were said to be burnt beyond recognition when authorities arrived.

In their haste to escape, the suspects left behind one of their cellphones, a phone that was used to trace them.

Police tracked Magoma and Sambo to the village of Hasani Dakari outside Malamulele in the Collins Chabane municipality the following day, where they were swiftly arrested.

The suspects appeared at the Vuwani Magistrate’s Court on Monday charged with two counts of murder, house robbery and arson.

Tensions were high outside the court as many farmers clad in khaki farm gear gathered to support Louis and Cloete’s grieving family. Several of them waved placards reading “Enough is Enough” to highlight killings of farm workers.

There was also a heavy presence of police, who were led by Levubu police station commissioner Lieutenant Colonel Hangwani Mahafha.

The case was postponed to 11 May as further investigations remain ongoing.

“Our hearts are torn apart and we are living in fear. We do not expect this to happen when we are doing our job,” he said.