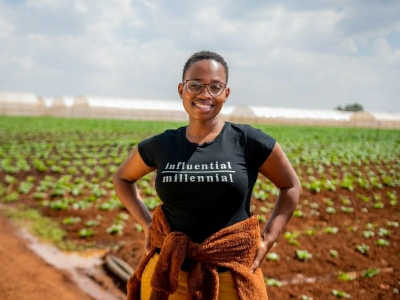 Unemployed and frustrated, Welile Gumede took a giant step in 2018: with no experience in agriculture, she fixed up a neglected greenhouse and began farming vegetables.

The rundown greenhouse belonged to Qwabe-Nkanini Trust, and Gumede funded its renovation with her daughter’s social grant.

Today, Gumede, from Maphumulo KZN, is enjoying the fruits of her hard work and determination.

When she started, she produced less than 700 kg of tomatoes and green peppers per year on her farm in KwaDukuza.

That number has since risen to 18 tons of tomatoes and green peppers every year, as has the number of employees from two in 2018 to 17 in 2021.

“My customers are people who sell vegetables on the streets. I enjoy working and doing business with them,” she said.

She admits it has been hard to stay afloat, but the National Empowerment Fund threw her a lifeline after granting her R3.5 million last year.

“This brought huge relief to me and my employees who were scared of being laid off.”

When she signed the 10-year-old renewable lease with Qwabe-Nkanini Trust in 2018, the farm had only three tunnels.

“My approach to life is to do, rather than talking. Talk is cheap. If you have a dream, chase it.”

The only daughter among five brothers, Gumede said her mother’s brevity rubbed off on her.

She said her mother, who is a teacher, provided for the family when her father was unemployed.

“She always woke up in the morning so that she could provide for us. Not once did I ever hear her complain,” said Gumede.

The go-getter said she studied Dental Assisting at the Durban University of Technology, completing the course in 2009.

Afterwards, she couldn’t find a job, leaving her frustrated and desperate.

But instead of idling at home, she registered for Chemical Engineering at the Berea Technical College in Durban.

This is when she turned to farming, a sector she admits she was not interested in.

She enjoys it now.

“I wouldn’t trade what I do with anything. I am happy and this is the best feeling in the world.”

Her advice to upcoming business people: “Don’t procrastinate, just do.”