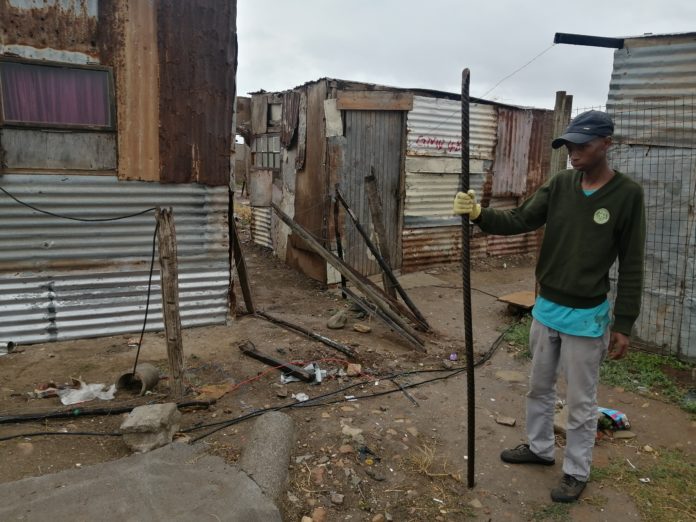 Xolisani Boma promised to take his three-year-old daughter to work with him – but that never happened.

Instead the little girl witnessed her 26-year-old father drop dead in front of his shack in Govan Mbeki Village in Port Elizabeth as he was electrocuted by izinyoka cables.

Xolisani’s girlfriend, Zanele Charles, told Scrolla.Africa that he wasn’t working that day – and was planning to take their daughter to show her where he worked at Wors King Butchery.

“But he decided to quickly fix a pole that had fallen on his fence,” said Zanele.

“His younger brother was helping him. He was wearing shorts, gloves and slops and he used an iron bar to dig the hole.”

She said a few minutes later her daughter came into the house crying.

“She told me her father had fallen down. I rushed outside and found him face down. We tried to pull him from the wires but he was still being electrocuted,” she said.

“His brother beat him on his legs with a plank and we managed to remove him but his hands were stiff. I asked his friends to help us to rush him to hospital in a private car but he died on the way.”

Zanele said they had been together for eight years.

“He was a caring man and full of love. I doubt if I will go back to our shack again because it will remind me of this terrible day in my life,” she said.

Nomimi Sokani, a neighbour and community leader, said: “I heard him bumping his head against his shack when he fell down. I went outside but we couldn’t help him,” he said.

“We are poor and we can’t afford a litre of paraffin for R16. Most of us survive on social grants. For four years we have been doing illegal connections and four of our shacks have also been torched by these izinyoka cables since last year.”