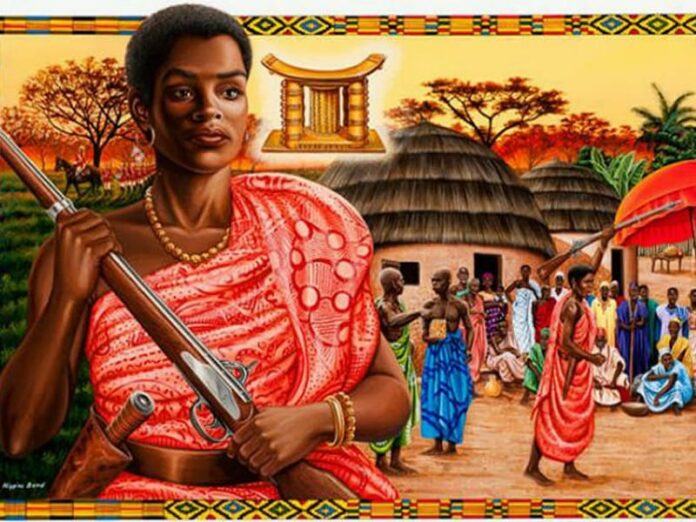 African Queens: Scrolla.Africa is showcasing the lives of seven African Queens from history whose remarkable lives went on to shape the world today.

The Sepedi idiom, “Mosadi o tshwara thipa ka bogaleng”, which loosely translates to “A woman grabs a knife by the blade”, is a powerful idiom which recognises women’s ability to always rise up when men fail, or fight when it gets tough.

The idiom for me is an epitome of the warrior queen mother of the Ashanti people, (Ghananians) Yaa Asantewaa.

She took up arms and led her people in fighting the British, something that was unheard of at the time.

Yaa Asantewaa fought for what she knew was at the heart of her people’s existence, their ancestral Golden Stool.

Yaa Asantewaa was born around 1840 in the Asona royalty from the Besease clan, a family of traditional rulers. Her story is perhaps one of the greatest of them all.

She rose to lead the army against the British after her son King Prempeh I was exiled to Seychelles by the colonisers.

British governor Sir Frederick Hodgson didn’t know who he was messing with when he demanded to sit on the Golden Stool. Not even kings were allowed to sit on it but the British even wanted to own it.

This angered the Ashanti people who were being led by Queen Mother Yaa Asantewaa at the time.

At a village meeting to discuss Hodgson’s taboo request, the men were discouraged and Yaa Asantewaa came forward.

“How can a proud and brave people like the Asante sit back and look while white men took away their king and chiefs, and humiliated them with a demand for the Golden Stool? The Golden Stool only means money to the white man; they have searched and dug everywhere for it. If you, the chiefs of Asante, are going to behave like cowards and not fight, I shall call upon my fellow women. We will fight till the last of us fall in the battlefields,” she said.

Her speech worked. Soon an army of 5 000 men and women were ready to go to what is known as the Ashanti-British “War of the Golden Stool”.

Though the Ashanti people succeeded under the leadership of the warrior queen mother she was captured by the British and sent to the Seychelles where she died in 1929.

Her bravery has shown that women can venture into any profession deemed male dominated and even do better.

A museum in Kwaso in the Ejisu-Juaben district in Ghana was dedicated to her in August 2000.