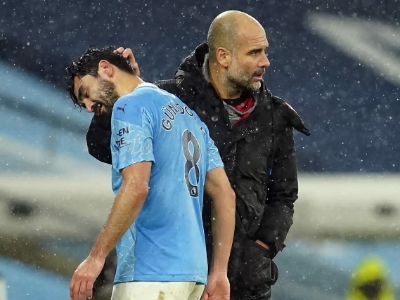 In their nine English Premier League matches in 2021, Manchester City have conceded only two goals and they have kept a clean defensive sheet in 22 matches this season.

“If the forwards feel the team are defending well, they are more relaxed. Our back four have been amazing,” said Pep Guardiola, Manchester City coach.

Upfront the Citizens are ruthless, often leaving their opponents praying for the final whistle. In nine matches they have scored 25 goals.

“We have made an incredible improvement. We don’t make mistakes. Always I believe, even as a teenager at Barcelona, that you should create more scoring chances,” he said.

“Football is a game where you can create more chances than the opponent and still lose games. The more you create the closer you are to winning games. After that, you have to try to be good in the box.”

On Wednesday at 10.15pm they play their catch-up match away to Everton at Goodison Park.

Guardiola and the team will be looking to make it 10 straight wins and become the first team to do so this season in the Premier League. They will stretch their lead to 10 points at the top of the table if they do that.

“I want to finish the match with having created more chances conceding very few,” he said.

The inconsistent Everton have collected eight points out of the possible 21 in their first seven matches in 2021.

Defensively, they have conceded 11 goals and they have netted only eight goals. Everton seem to be sitting ducks for the rampant Manchester City.

The other match on Wednesday will see Burnley host Fulham at Turf Moor at 8pm.