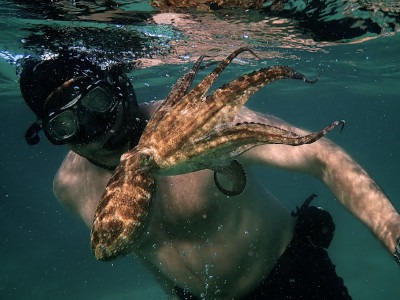 The success of an Oscar-winning documentary and a recent landmark study have combined to teach the world that octopuses deserve our good care.

Last September, the unlikely friendship formed between a Cape Town filmmaker called Craig Foster and a wild octopus won the affections of viewers all over the world.

While last month, a groundbreaking study published in iScience provided the strongest evidence yet that octopuses feel pain in the same way that mammals do.

The experiment, led by Robyn Crook at her lab in San Francisco State University in the US, involved letting an octopus choose to linger in either a spotted room or a striped room.

She then injected a mildly stinging acetic acid into one of the octopus’s arms in its preferred room. The next day she let it choose which room to linger in again.

All seven octopuses which were tested chose the room they hadn’t initially preferred, indicating they suffered emotional trauma because of the pain caused to them.

A fish pain researcher at the University of Gothenburg in Sweden, Lynne Sneddon, says the study “shows beyond a doubt that [octopuses] are capable of experiencing pain.”

In her speech, Ehrlich said, “I know there are many South Africans awake watching right now. In many ways, this really is a tiny personal story that played out in a seaforest at the very tip of Africa, but on a more universal level, I hope that it provided a glimpse of a different kind of relationship between human beings and the natural world.”

The intelligence and emotional complexity of the octopus in the documentary has been scientifically supported by Crook’s study, bolstering the case for establishing welfare regulations for these animals.

Public support is shifting in favour of these creatures, which are still farmed for food across the globe.