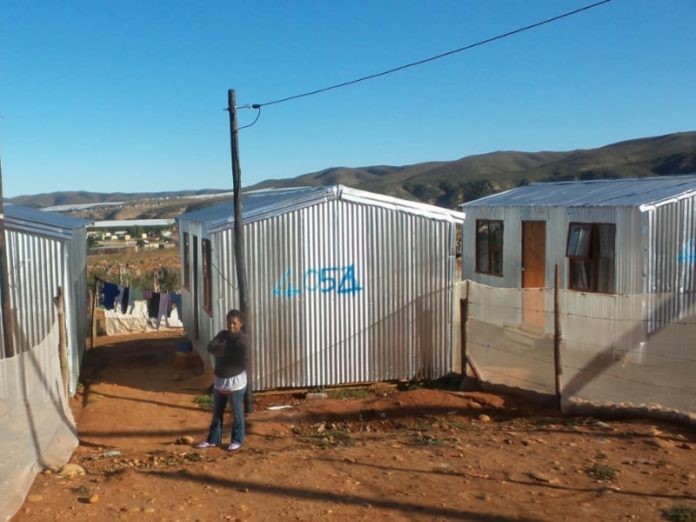 The municipality has failed to provide adequate facilities for the residents of Silvertown, so they have been forced to use the cemetery as a communal toilet.

A handful of mobile toilets in the area is evidently too few for the hundreds of residents of Silvertown, near the Hankey game reserve.

Many say they don’t want to use the toilets as they are always overflowing and they fear the risk of catching diseases such as cholera.

Silvertown was established last year by the Kouga Municipality and most of the residents were relocated there from Stofwolk which was situated on a wetland.

Rochelle Antonie was moved to Silvertown and lives with her three children in a zinc shelter provided by the municipality – but it leaks when it rains.

She said she was happy when they were moved to the area but it is in fact no better than where they were.

“There are no toilets and we go to the local graveyard to relieve ourselves,” she said.

“There are no water taps and the water tankers don’t come regularly. Some people buy bottled water while the rest struggle.”

She said they scramble in the morning to empty buckets with excrement in the graveyard.

“Some people squat in the graveyard in full view,” she said.

“The municipality should provide many mobile toilets and water taps.”

A resident named Klaas said he wraps the family’s excrement in plastic bags and throws it in the graveyard in the morning.

“I don’t think that the dead are happy when their graves are being abused. We are cursed because we don’t respect the dead. We are at risk of getting cholera because there is too much raw faeces in the area,” said Klaas.

The Executive Mayor of Kouga Municipality, Horatio Hendricks said provisions were already set aside for infrastructure in Silvertown.

He did not acknowledge that residents had been forced to form an undignified communal toilet, saying, “There are chemical toilets, standpipes and water tanks at Silvertown. More of these services will be provided in the new financial year.”