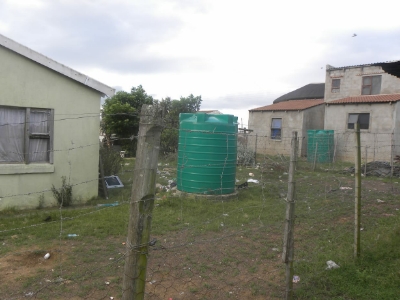 Residents of Paterson, a small town outside Gqeberha, are angry that they live in an area with abundant water sources yet their taps are always dry.

The little farming town is about 30 kilometres from the Sundays River, a major source of freshwater.

The town is also under the Sundays River Valley Municipality which is home to one of the best irrigated citrus plantations in the country.

Municipal spokesperson, Zusiphe Mtirara blamed the erratic supply of water to the town on an ageing water infrastructure system.

“We do not have water shortages but the water line which transports water from Caesar’s Dam in Addo to Paterson always experiences a lot of breakages and bursts which interrupts water supply. The system is old,” said Mtirara.

However, angry residents are baffled that a couple of years ago the municipality provided them with bulk water storage tanks to harvest rainwater. They said some of the tanks are getting damaged as they were left unconnected to the roofs of the houses.

“How can the tanks collect rain water when the municipality did a half job? They did not connect some of the tanks to the roofs. It was a waste of taxpayers’ money. Some of the tanks are getting damaged from neglect. Those that were connected have no water in them.

“This region has had poor rainy seasons for the past five years. The municipality should be filling our tanks with water,” said Lulama Nolingo.

Nolingo said his family can’t afford to buy bottled water as they worked on a nearby farm earning a pittance.