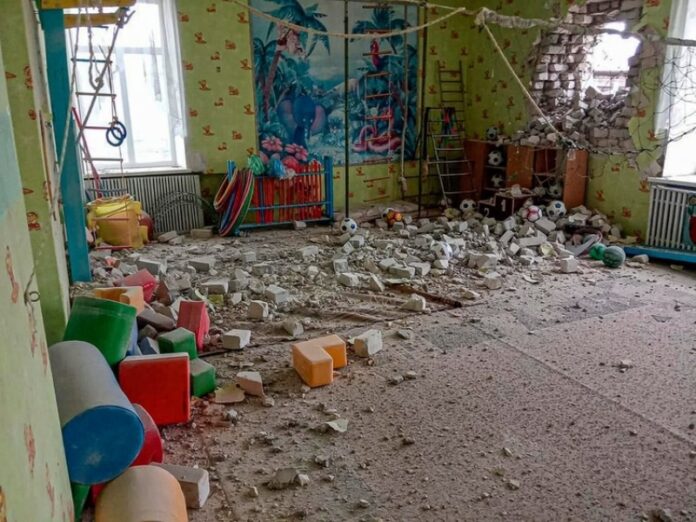 A children’s nursery was one of 20 locations reportedly shelled on Thursday in eastern Ukraine, raising fears that Russia could invade the Eastern European country in the coming days.

The attacks were carried out by separatists in Ukraine’s eastern Donbar region who are supported by the Russian government.

Two people were injured in the attack on the kindergarten, footage of which shows debris from a destroyed building lying amongst children’s toys.

Ukraine’s military has said that a school was among the other targets.

US President Joe Biden has warned that the attacks will be used as an excuse for Russia to invade.

“Every indication we have is they’re prepared to go into Ukraine, attack Ukraine … My sense is it will happen in the next several days,” Biden told reporters on Thursday.

In recent weeks around 150,000 Russian troops have amassed on the Ukrainian border.

If Putin chooses to invade, it would mark the largest land invasion since the end of the Second World War.

US Secretary of State Anthony Blinken said he believes that Russia would not use “conventional” weapons if it went to war. This has raised fears that chemical, biological, or even nuclear weapons could be used against Ukrainians.

Regardless of the weapons used, an invasion would take a heavy toll on the people of Ukraine, and possibly result in thousands of civilian deaths.