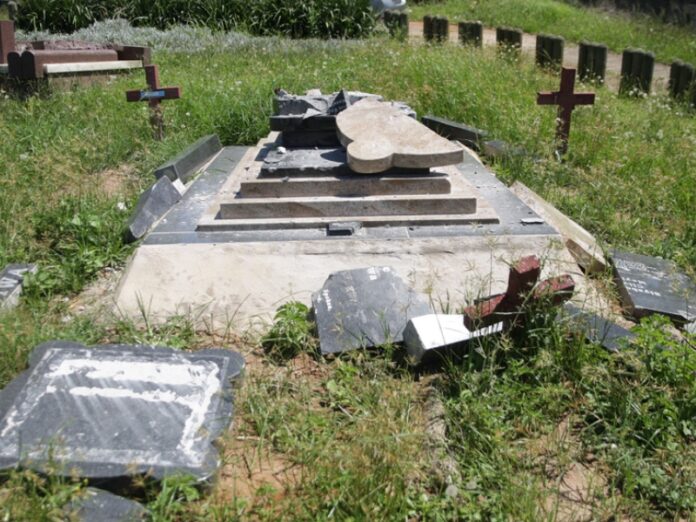 It has been over two years since the tombstone of former Bafana Bafana captain Senzo Meyiwa was destroyed by vandals.

The South African Football Association (Safa), after promising to repair the grave, are now blaming the pandemic for the delay.

The Orlando Pirates goalkeeper, who was shot dead by armed robbers in 2014, was laid to rest at the Durban Heroes Acre cemetery in Durban.

Mourners visiting the gravesite in December 2020 were shocked to find that the slain footballer’s gravestone had been smashed up.

Fragments of the marble stone were scattered around the Bafana legend’s grave, while the nearby grave of prominent writer and journalist Nat Nakasa had also been destroyed.

Meyiwa’s cousin Sifiso Meyiwa told Scrolla.Africa that it was hard for them to see his grave in that condition while they still struggle to get justice for him.

“Safa promised to repair the tombstone soon after it was vandalised and that was in 2020,” said Sifiso.

Safa’s Kwenza Ngwenya said they appointed a service provider to repair the tombstone.

“Unfortunately they had challenges after the lockdown was introduced in 2020 and they were unable to continue with the work. What I can tell you is that the repair will take place soon,” he told Scrolla.Africa.

The family has also had troubles with the tombstone of Senzo Meyiwa’s father, Sam Meyiwa, which had to be removed by the service provider after the family failed to pay R70,000 for it.

The trial of five men accused of murdering the 30-year-old Meyiwa got underway in April, but Meyiwa’s family believes the men who are currently being tried in court for his murder are not his real killers.