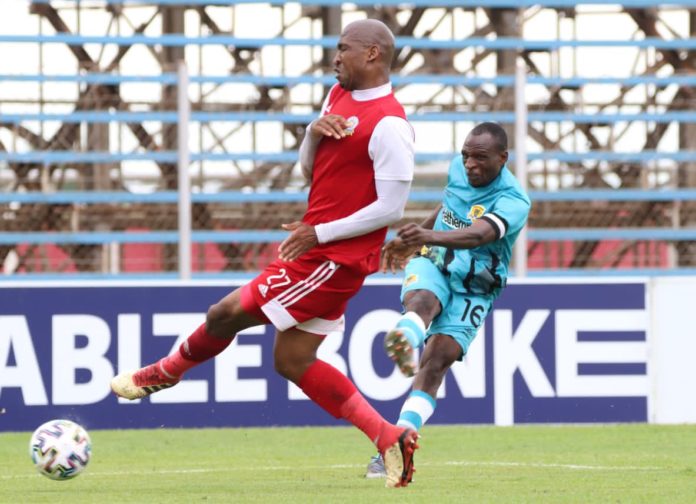 Tshakhuma Tsha Madzivhandila (TTM) came from goal down to force a 1-1 draw against Black Leopards in the first Vhembe derby in the DStv premiership on Wednesday afternoon at Thohoyandou Stadium, Limpopo.

Leopards keeper King Ndlovu limped off the park just before half time after a collision with Nicolus Lukubeni and was replaced by Jonas Mendes.

On the stroke of half time, Leopards’ Rodrick Kabwe opened the scoring from the penalty spot after Thabo Rakhale fouled Tebogo Makobela inside the box.

In the second half, Tshakhuma striker Rhulani Manzini kept Leopards keeper Jonas Mendes on his toes and Manzini soon scored with a powerful shot from a free kick to make the score 1-1.

Vhadau Vha Damani could have stolen the match for TTM but Rhulani Manzini’s free kick hit the side netting with keeper Jonas Mendes well beaten.

TTM coach Joel Masutha said: “We wanted to go to half time with a draw but we conceded. I think sharing the spoils is a fair result,” said Masutha.

Coach Dylan Kerr said: “We talked about this before the match. I showed the players the threat of TTM in corners and free kicks but we still conceded from the free kick.”

Leopards will be looking for the second win of the season when they clash with on-form Swallows FC in their next DStv Premiership match on Sunday at Thohoyandou Stadium.

The draw moves TTM to 8th on the log table while the woes continue for Black Leopards who remain in 15th position.