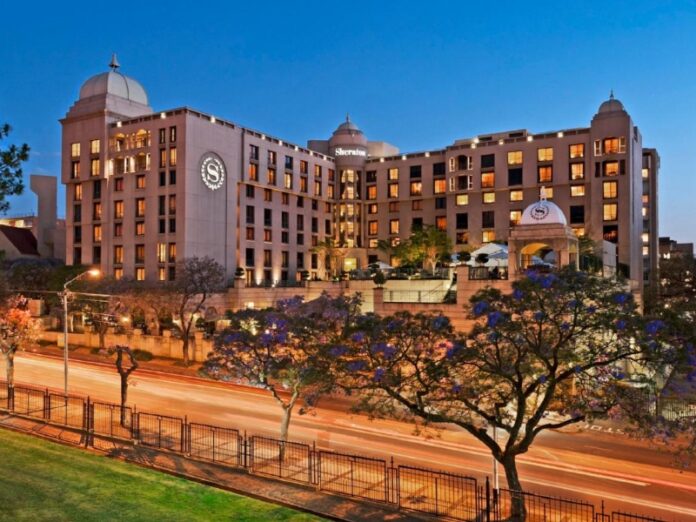 A five-star hotel and a government department are among several high profile clients accused by the Tshwane government of not paying their electricity bills.

So the city turned off their power!

City officials turned up at the five-star Sheraton Hotel located near the Union buildings on Wednesday – not to book a romantic weekend away or an afternoon at the spa – but to turn off its power.

After they flipped the switch, only the hotel’s water supply was connected, so at least guests could still enjoy a dip in the pool.

“We mean business. Make arrangements to pay your account before you find yourself in the dark,” the City said in a social media post on Wednesday.

The Sheraton Hotel has not paid any of its service bills since the onset of the Covid-19 pandemic, amassing a debt of R23 million in rates, taxes, water and electricity bills.

Meanwhile, State defence company Denel also found themselves in the Tshwane government’s crosshairs. After amassing a debt of over R2.2 million – their services were also shut off on Wednesday afternoon.

Other companies shut off include the Lyttelton Shopping Centre, which owes R750,000, the Blue Beacon commercial property, which owes R2.3 million and the department of infrastructure development, owing R260 million.

The City of Tshwane confirmed they have a list of 47 companies that owe them money – that’s a lot of pitch black rooms come nighttime!

Knowing that the City of Tshwane wasn’t messing around, the South African National Defence Force (SANDF) Navy headquarters paid up their debts shortly after their power was cut on Wednesday. The City restored their power shortly afterwards.

City of Tshwane spokesperson Selby Bokaba said cutting off the power to the buildings comes as a last resort after attempting to negotiate a deal with those involved.

“Some try to emotionally blackmail us by saying we will put people out of jobs by cutting services. But we are also a service provider, and we cannot pay our debts if our customers do not pay us. We have a debtor’s book of over R17 billion,” said Bokaba.

The spokesperson added that their attempts to get their debt paid does not stop today, next week they will head to several residential complexes and estates.