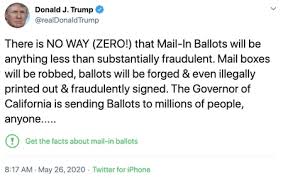 Twitter’s most famous user says he’s going to close it down.

Twitter has labelled one of Donald Trump’s tweets “potentially misleading” and he’s furious. Even more furious than usual.

The tweet, about voting in the US, now appears with an exclamation mark – and a link underneath to factual information.

“completely stifling free speech, and I, as president, will not allow it to happen.

“We will strongly regulate, or close them down.”

US legal experts say he does not have the power to shut Twitter down.