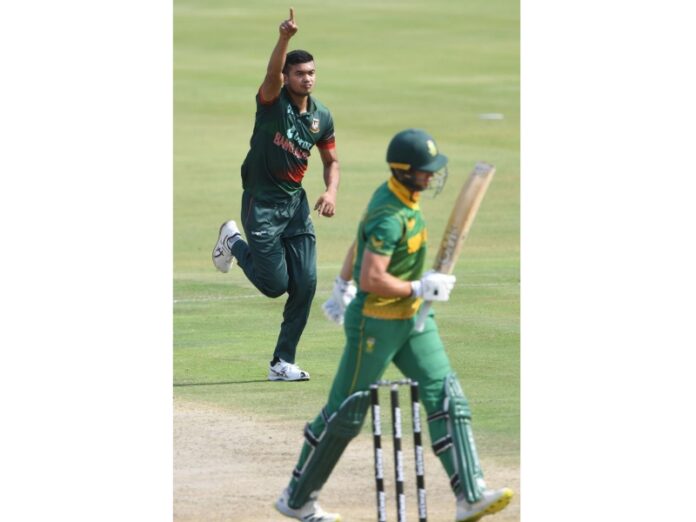 Bangladesh registered their first ever ODI series win in South Africa after a dominant nine-wicket victory in Centurion.

The Proteas won the toss and elected to bat first, looking in good touch for the first hour of play. The momentum quickly changed hands once Taskin Ahmed got going with the ball, though, and the visitors began to seize control.

Ahmed picked up a glorious five-wicket haul to bowl the hosts out for just 154 – with Janneman Malan, Kyle Verreynne and David Miller all falling victim to the 27-year-old pacer.

Ahmed, who picked up the man of the match and man of the series awards after the game, said that the results all stem from following a set process.

“I’m feeling happy and proud as we have won for the first time in South Africa. I have been following the same process in the last one and a half years,” Ahmed said post-match.

“My captain supports me in every match and gives me a particular role, I just try to follow that. I have been working on my length and just trying to follow the basics.”

Bangladesh captain Tamim Iqbal made quick work of the chase today, leading from the front to finish not out on 87 off just 82 deliveries. The veteran called the series win one of the biggest achievements of his career.

“This is one of our biggest achievements – it’s a massive win. We take a lot of pride in ODI cricket, we believe we are a good side. This is one front where we have been doing well in the last five to six years. Winning a series overseas was missing, but we have managed to do that this time,” Iqbal said post-match.

The first test commences on 31 March at Kingsmead in Durban before the second and final test in Port Elizabeth between 8 and 12 April.