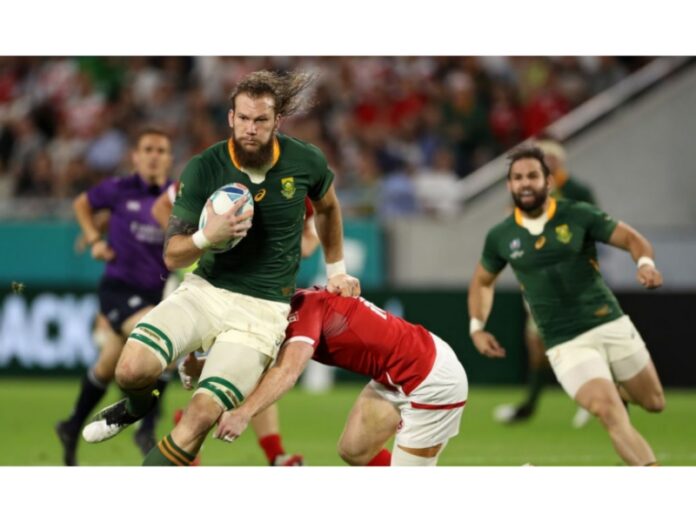 Three key Springbok team members will be unavailable for selection for the upcoming Wales tour in July through injury, but star man Cheslin Kolbe is set to recover in time.

Scrumhalf Cobus Reinach, winger Sbu Nkosi and RG Snyman will be unable to play against Wales in two months’ time.

Reinach suffered a dislocated shoulder and is due to undergo surgery on Wednesday, keeping him on the sidelines for four months.

“I could not immediately feel that [the shoulder] was out, because the adrenaline was running so high and I was able to finish the first half well,” Reinach told Rapport.

“Unfortunately, it is part of the game. There’s never a good time to get injured, but we’re thankful it happened sooner rather than later.”

Pacey winger Sbu Nkosi had surgery for a broken ankle recently while lock RG Snyman is still suffering with a knee injury. All three players are unlikely to make the cut for the Tests against Wales.

However, there is good news for the World Cup champions as winger Cheslin Kolbe is set to be fit following a thumb injury.

The first Test against Wales is set for 2 July in Pretoria before heading to Bloemfontein on 9 July. The tour ends in Cape Town on 16 July.

Following the Wales Tests, South Africa will play host yet again when they take on New Zealand and Argentina in the Rugby Championship home Tests.

The Rugby Championship will get underway in August as the Springboks seek redemption following a difficult tournament last year.

In preparation for next year’s World Cup, the Springboks have selected Toulon as their training base for the group stages.

South Africa was given the luxury of being able to choose their base as they are the top-ranked team in the World Rugby rankings.

The tournament in France kicks off in September 2023 and will conclude on Saturday 28 October when the Springboks will be hoping to defend their crown.