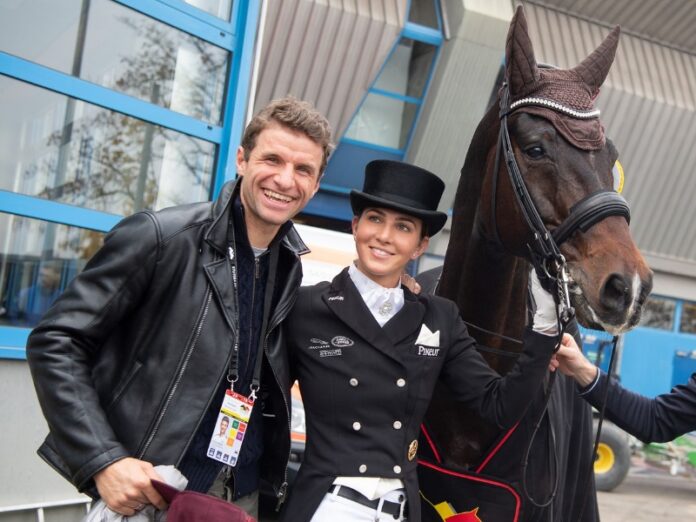 In an incident at least as shocking as Kurt Zouma kicking his cats, Thomas Muller and his wife have been accused of selling frozen horse semen.

People for the Ethical Treatment of Animals (PETA) claim that horses in the care of the Bayern Munich attacker and his wife have been victims of unnatural sexual acts by the couple.

The accusations come after Muller claimed one of his horses suffered an injury ahead of breeding season, an incident that PETA ruled as preventable and unnecessary.

The World Cup winner’s wife Lisa Muller is a horse trainer and rides horses competitively and along with her husband they run a horse farm where it is alleged that the pair sell frozen horse semen for around R3,500 per dose.

32-year-old Muller said the horse slipped and fell during a test which caused the injury.

“Unfortunately, we have bad news. Our D’Avie will not be available in the next few months. He slipped during a test attempt to prepare for breeding season and fell dramatically on his side,” he said in a statement.

PETA spokesperson Jana Hoger however claims the couple want to keep the horse away from breeding season to continue making profit from selling its semen.

“It is horrible that self-proclaimed horse lovers force animals in their care to perform unnatural sexual acts to profit from it,” the spokesperson said in a statement.

This bizarre incident comes in the same week as the leaked video showing the West Ham United defender Kurt Zouma kicking his cat across his kitchen floor.

The French defender suffered major consequences for his actions, losing both his personal sponsorships and the sponsorship from his club.

Zouma was also given the maximum fine of R5 million and had his cats taken away by a local animal welfare group in England.

People questioned the punishment Zouma received, arguing that the defender was harshly punished due to the colour of his skin.

It is yet to be seen if Muller and his wife will suffer the same fate as Zouma did.