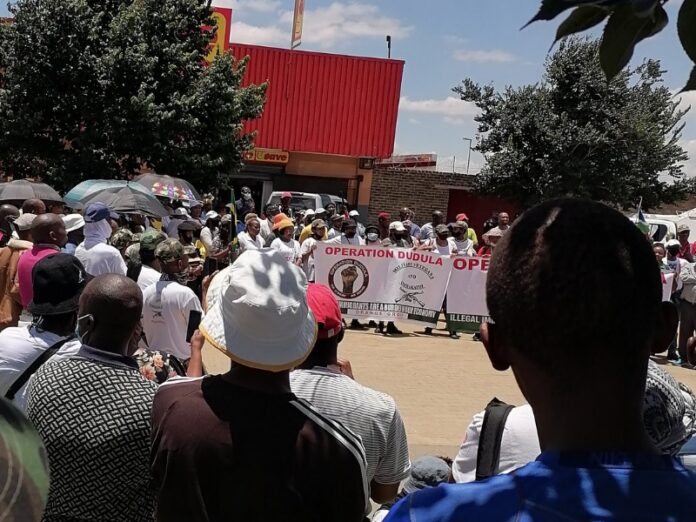 They rape, rob, shoot and harass innocent people in the name of Dudula Operations.

A group of people who tell their victims that they are members of Operation Dudula go to the homes of people at night and demand they surrender their worldly possessions to these vigilantes.

Last Tuesday, three women were raped, a man was badly assaulted and five others had firearms pointed at them by the group who told foreigners of Vezinyawo transit camp to leave. It is on the outskirts of Alexandra township in Johannesburg.

Two of the women who were raped were mistaken as foreigners and are in fact locals. They have both opened criminal cases of rape at the Bramley police station and a third woman, who is a Malawian, has yet to open a case.

The man who was badly assaulted has also opened a case of assault, grievous bodily harm, robbery, and pointing of a firearm when they broke into his house.

The victim spoke to Scrolla.Africa on the ordeal of what happened on 8 February, where his wife was one of the women who was gang-raped by the group.

“While a group of 15 people assaulted me in the rain outside my house, two men took turns raping my wife,” he said.

He said eight of the men were heavily armed with guns and hammers. “After realising that I was a South African, they told me to point out houses where foreigners stay.

“I told them to kill me rather than do what they were requesting me to do,” he said.

While he was being assaulted and his wife was being raped, two other women were also being raped by the same gang members. “One woman was raped in front of her three-year-old daughter, while the other one was raped while her husband watched.”

One rape victim, who could not be named, said the men came into her house telling her that they were from Dudula Operations and they were removing all foreigners. “I was pleased that I was not a foreigner and even tried to show them my ID book. But they didn’t listen to me and one of them raped me.”

Zandile Dabula, national secretary for Dudula Operations, told Scrolla.Africa that they are not associating themselves with the criminals who terrorise residents in the name of Dudula Operations.

“We are a recognised organisation who work with the law enforcement. Wherever we go to conduct our operations, we inform the police and we cause no harm to anyone.

“We call upon the police to arrest all criminals who commit the crime in the name of Dudula,” she said.