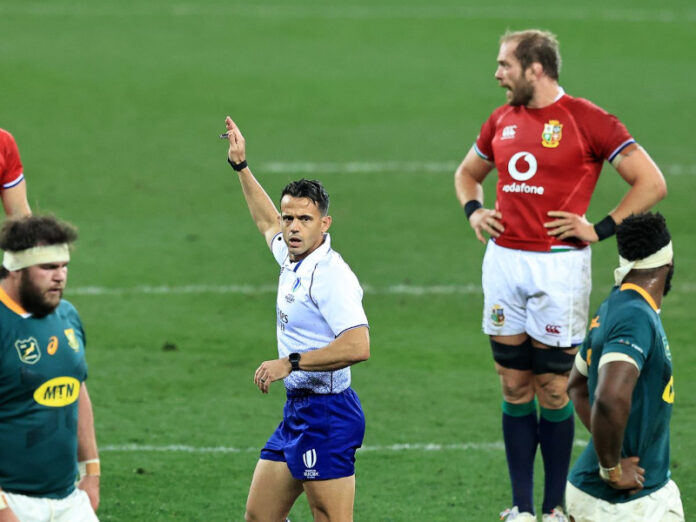 Australian referee Nic Berry, has been named winner of the 2021 Roger Vanderfield Referee of the Year award.

Just in case South African Director of Rugby Rassie Erasmus was beginning to forget about the debacle over the video he made after the First Test against the Lions in July 2021.

During the video, Erasmus accused Berry of being disrespectful towards Bok captain Siya Kolisi and pointed out potential wrong decisions the referee made during the first Test.

Of course there is nothing to say that Nic Berry got the award because of the tape that Rassie made. After all, this is not the first time that Berry has been given this award.

He already won it in 2019 and in 2021 he also officiated in both the Super Rugby AU and Super Rugby Trans-Tasman season, as well as in the July and October/November Test windows.

There is also nothing to say that Nic Berry publicly howling about the tape had anything to do with it.

“I have spent many years trying to build my reputation as an international referee and in the course of his video which was posted online, Mr Erasmus has caused immeasurable damage,” and “my reputation as a referee and person will forever be tarnished,” he said in a statement.

It’s merely a coincidence. That’s what it is. Coincidence.

There, there, Mr Berry. Many happy whistle-blowing days to you. Hope you feel a lot better now.

Perhaps if Rassie made a tearful declaration about how his reputation has been tarnished he might also get an award.

As rugby writer Mark Keohane was quick to point out, what a world where “the guy who points out 30 odd mistakes gets banned & the muppet who made the mistakes is named ref of the year.”