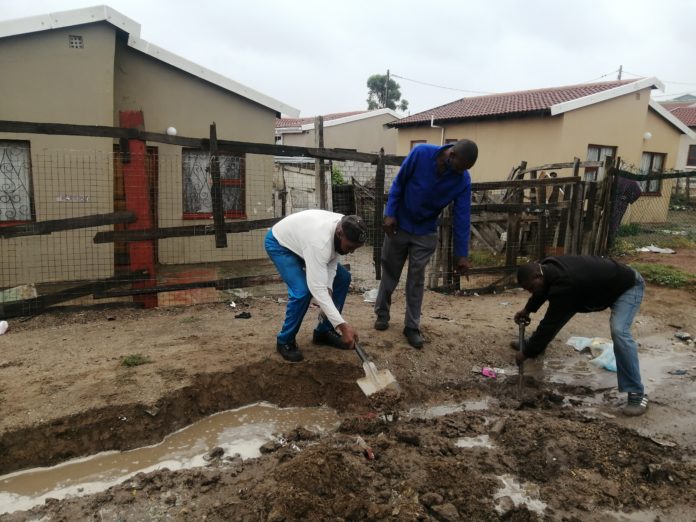 For seven years the residents of Rolihlahla township in Port Elizabeth have waited for the municipality to fix their stormwater drains but nothing has been done.

Even after the Nelson Mandela Bay Municipality awarded a R21 million contract to SMMEs in 2018 there was still no action.

Now residents have been forced to roll up their sleeves and do the job themselves.

Sidwell Khuze, 70, said he has been living in the area for years and his furniture was damaged. Often when it rains the water from the houses on the upper level floods his house.

“For many years I reported the problem to the ward councillor’s office but I never got help. They said I should fix it myself,” said Sidwell.

“I bought a truckload of soil and offloaded it in front of my gate to block the water. What are we voting for? Our municipality is useless,” he said.

Another resident, Loyiso Gcume who cleaned two drains in front of his house said, “The last time these drains were cleaned was in about 2014.

“They left the rubbish next to the drains,” he said.

“We are suffering while the politicians and the SMMEs are fighting over tenders. We heard in our IDP meetings that there was a R21 million tender to clean drains, but we never saw anything being done.

“I cleaned up the drains because me and my family suffer while the municipal officials are not affected.”

Municipal spokesperson Mthubanzi Mniki said: “We are busy with a project to clear storm water drains. Some areas might not have been reached, but they will be covered this year.”

But Mniki could not confirm the allegations that residents should fix their own drains.

“That information will have to be verified first. If so, why has there been a delay?”