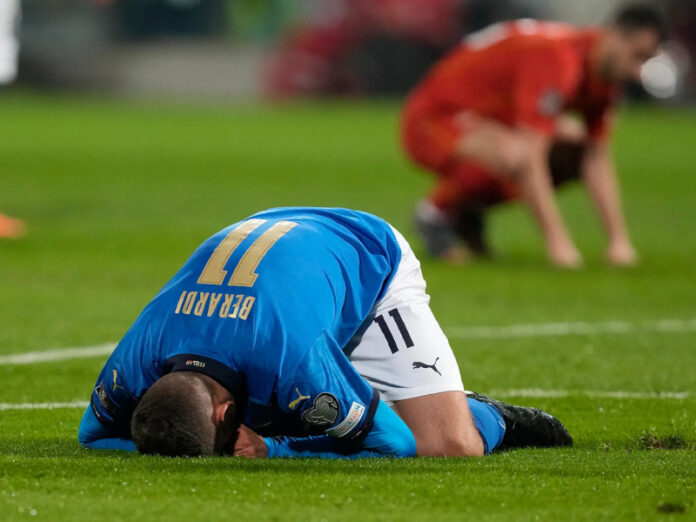 European Champions Italy have once again failed to qualify for the Fifa World Cup after suffering a shock defeat to North Macedonia in the playoffs for the competition on Thursday.

Aleksandar Trajkovski’s glorious long-range strike in the 92nd minute ensured that Italy lost the game 1-0 and would fail to qualify for a second successive World Cup, having missed out on the tournament in Russia in 2018.

It has been a fall from grace for the famous footballing nation; the last time they played a knockout stage game at a World Cup was 2006, when they won the trophy.

In 2014, they were knocked out in the group stages.

If Italy manage to qualify for the next World Cup in 2026, it will end a 12-year wait to see the former champions compete at the prestigious event once again.

Failing to qualify for the World Cup as the champions of Europe is perhaps the nation’s biggest disappointment, but they only have themselves to blame.

Without disrespecting North Macedonia, this was a fixture Italy had no excuse to lose – conceding 32 shots on goal, 66% possession and close to 600 passes. The Italians dominated the game but failed to put the ball in the back of the net.

Italy had been on the decline in terms of football since their 2006 World Cup triumph, but the appointment of Roberto Mancini in 2018 seemed to change that.

Italy were deserving winners of the European Championship last year after defeating England in what looked to be a turning point for Italy.

The side went on an unbeaten run of 37 games under Mancini and Italy looked to be a dominant force in football once again.

However, the whole of Italy forgot about that marvellous record and their triumph in the Euros when Trajkovski put them to the sword in the final minutes of the game.

Portugal on the other hand managed a 3-1 victory over Turkey and will now face North Macedonia on Tuesday for a spot at the World Cup.