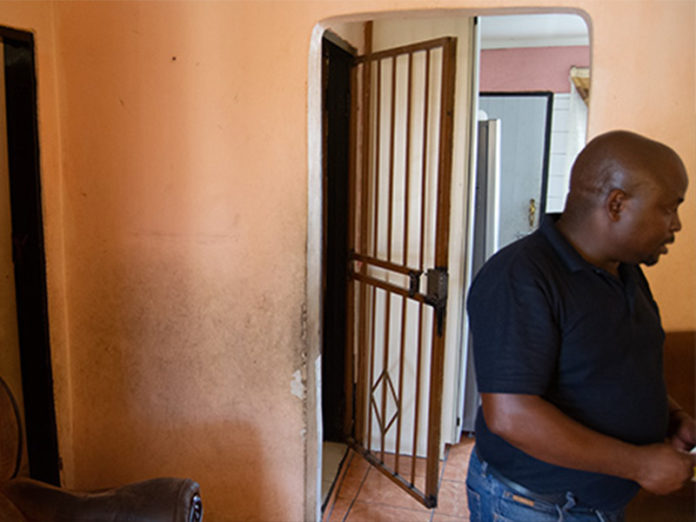 After hitmen told him his policewoman wife wanted to kill him for his insurance payout, Justice Mudau was shocked when his wife was released on bail with no warning

But then the next chapter in his nightmare began

Mudau had to live with her in the same house, behind his bedroom jail bars for…

“For the eight months that we lived in the same house, we never spoke. There was high tension in the house every day,” recalls Justice.

Justice described the daily hell of his existence.

He said that the moment his wife came home, he locked himself in the bedroom, and only went into the lounge when she left the house.

“When I see her, I could get a mini heart attack and be traumatised.”

“She could cook for herself and children. For eight months she was in the house, I never ate the food she cooked. I was eating takeaways. I used to throw away all my takeaway leftovers fearing that it may be poisoned,” he said.

Justice said he transferred money into her account to buy food for the children – to avoid legal issues of him not providing for his children.

Justice said that she finally moved out on 9 November 2018 – a month after he filed for divorce.

We asked Justice whether he noticed his wife turning cool on him before the hitmen turned up at his house.

Justice said that in the months before, he had noticed his wife’s behaviour changing. He remembered she was always on the phone, kept it on silent, always charging. “I thought she was having an affair,” he said.

He also recalled how she had brought home muthi which she wanted him to eat, and had then gobbled it down herself to prove it was not poisoned.

When he looks back, the turning point was when she got him arrested a few months earlier on fake charges of assault. She then withdrew the charges herself. (We have checked and there are indeed no charges on record).

After Nomsa left, the two children continued staying with Justice.

Nomsa is no longer working for the police.

As reported earlier, she had no comment when approached by Scrolla.Africa