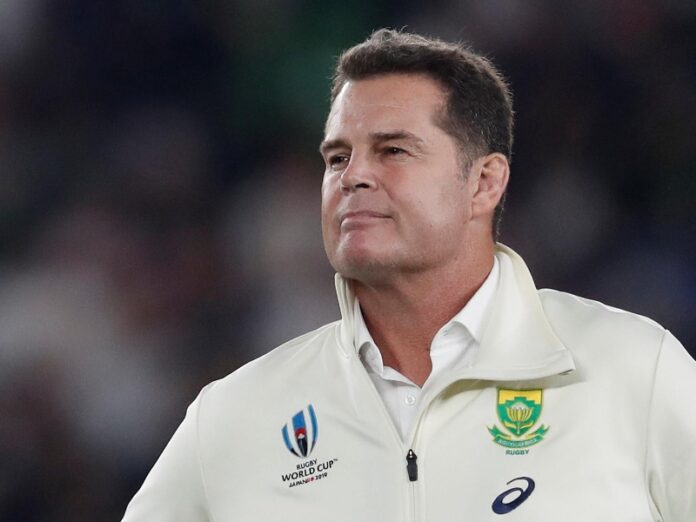 Rassie Erasmus believes rugby is “in trouble” and has a plan to save the game. And yes, it involves referees.

The Springbok World Cup winning coach and current director of rugby in South Africa has once again suggested that two referees should be used in the 2014 Varsity Shield.

Writing in his latest column for the Daily Mail, Erasmus said rugby has to address issues with breakdowns and scrums if they are to gain a larger audience.

Erasmus is not the only senior local administrator to notice the difference in scrums between the north and southern hemispheres.

He said scrums in South Africa are used as an attacking tool, gaining territory or points by forcing penalties from the opposition, but in the Northern Hemisphere, the sides attempt to get the scrum over with as quickly as possible to get the game moving again.

Despite the differences in the use of a scrum, Erasmus believes that a specialist scrum referee that officiates only at the set-piece would improve the game.

“For international rugby, why not form a group of world-class former players or coaches to serve as specialist scrummaging referees?”

“Get them in the game so they are on and off the pitch quickly. It would be their only job and they would have no impact on the rest of the game,” he wrote.

Erasmus added that there are around 20 scrums per game, therefore giving the scrum referees a microphone and linking them to the commentary to allow viewers to better understand the game.

“The idea of two referees sounds radical and it has been tried, but it can work if done correctly,” he said.

“If it’s efficient and non-intrusive, it could make a massive difference around the tackle and breakdown area.”

Erasmus famously had a run-in with referee Nic Berry last year for which he is serving a suspension.

“The idea is only to alleviate pressure, not add to it,” he said.