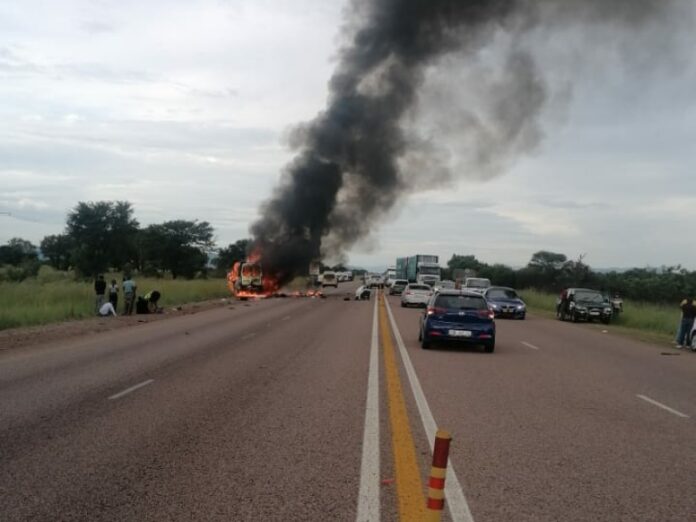 Ntebaleng Letsele, who survived the fatal road accident that claimed 17 lives on the N1 Highway near Mookgophong in Limpopo, said the scenes of the horrific accident still play out in her head.

The 32-year-old Ntebaleng boarded a Polokwane-bound 22-seater bus from Pretoria on Tuesday. She said her trip was peaceful until an SUV collided head-on with their bus after another driver lost control – reportedly due to a burst tyre.

Speaking to Scrolla.Africa after she was discharged from the FH Odendaal Hospital in Mokopane, Ntebaleng described the accident as a “death-defying” moment that will always linger through the corridors of her mind.

“It was like I was watching a horror movie but it was real and frightening. I have never seen something like that in my life except in action thrillers. How I survived remains a mystery,” she said,

Ntebaleng said before the bus could burst into flames, she silently prayed for her survival and when someone came to their rescue by breaking the windows, her prayers were answered.

“We were scattered all over the bus and trapped. But when a godsent angel of mercy came to our rescue, I was relieved.”

Ntebaleng, who works in Centurion, is now recovering from leg injuries at her home at Thakgalang village near Morebeng.

Following the fatal accident, a case of culpable homicide has been opened.

The deceased were taken to forensic mortuaries in Bela-Bela and Mokopane, where DNA testing was conducted on their family members on Thursday.

MEC for Transport and Community Safety Mavhungu Lerule-Ramakhanya said she is concerned that most of the fatal accidents reported on the N1 happen for the same reason.

“We have noted with concern that most accidents which happen particularly on this road have similar causes,” said Lerule-Ramakhanya.

“The drivers are reportedly reckless, exhausted. The cars are often speeding while others are not roadworthy. This is very disturbing because we always preach road safety but seemingly our messages are falling on deaf ears.