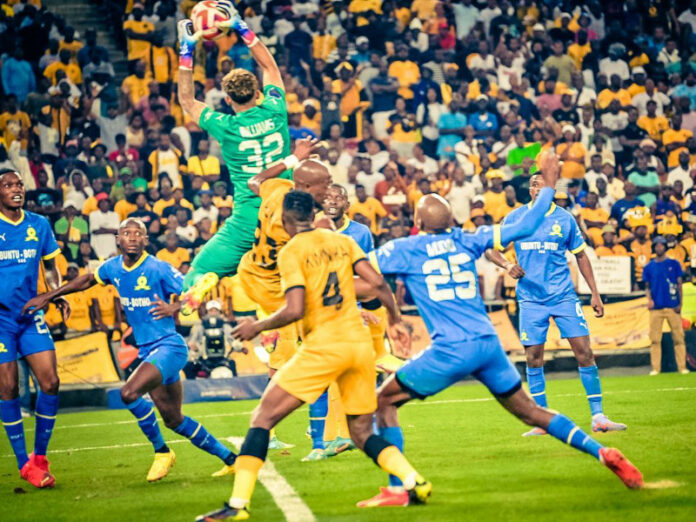 Neo Maema made the difference with his first-half strike to hand Mamelodi Sundowns a 1-0 win over Kaizer Chiefs and a record-breaking Premier Soccer League victory at FNB Stadium on Saturday night.

Maema struck in the 20th minute to make it 12 league victories on a spin for Sundowns and increase their lead to 17 points.

Masandawana broke SuperSport United’s 11 straight league wins in what could be a bold statement of their season ambitions.

The result saw Chiefs remain stuck on fifth spot but are now a very distant 22 points behind Masandawana.

With the match played before 32,489 in the  crowd, predominantly Chiefs fans, it turned out to be a terrible evening for Amakhosi who have now lost three successive league games.

With six minutes into the contest, Sundowns alerted Chiefs of their intentions when a deflected Themba Zwane effort hit the woodwork.

Having survived that attack, Chiefs did little to respond and it was the visitors who then broke the deadlock.

Peter Shalulile trapped a cut in from Khuliso Mudau before placing the ball for Maema to shoot at first attempt.

But Amakhosi almost hit back on the half-hour mark when Keagan Dolly was denied by the post after being set up by Samkelo Zwane.

Maema was back to try and grab a brace four minutes before halftime but shot just wide.

Chiefs could have equalised in the stoppage time of the first half but Bonfils-Caleb Bimenyimana was a shade too late to connect a low cross from Dolly.

It was Amakhosi who got the first real chance in the second stanza but Edmilson Dove’s header went just over the bar on 68 minutes.

In what could have been frustrating for Chiefs fans, Dolly then missed a low cross while inside the box and Grant Kekana headed to safety a second Chiefs attempt from a cross

Chiefs picked some momentum towards the end and it looked promising that they could steal a result but Ashley du Preez forced a save from Ronwen Williams before a Reeve Frodsler shot sailed just wide.

Substitute Kgaogelo Sekhgota could not do justice to a Wandile Duba cross with a minute to go and that doomed Chiefs.

It was an agonising end to Amakhosi as the referee blew the final whistle in a contest they could have won late.