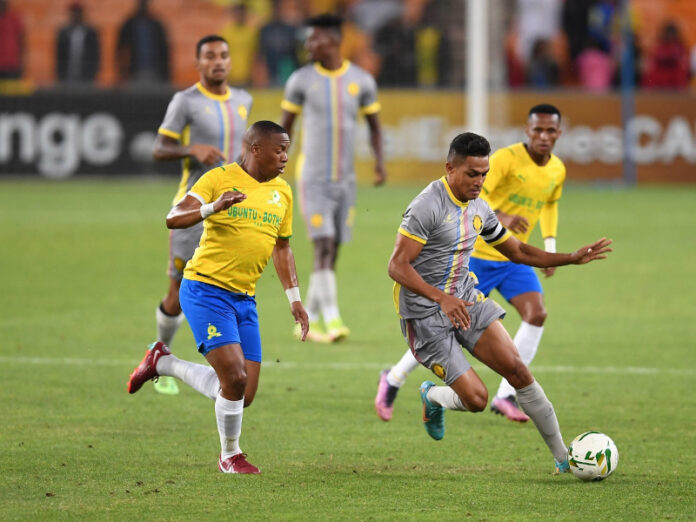 Mamelodi Sundowns were knocked out of the CAF Champions League after they lost 3-2 on aggregate to Petro de Luanda at FNB Stadium in Soweto on Saturday night.

The second leg in Soweto ended in a 1-1 draw but it was enough to see the visitors progressing to their first ever semifinals of the competition.

Sundowns were expected to be the one to go through despite losing 2-1 away last Saturday. They only have themselves to blame for their exit.

Once again they missed a number of scoring chances – especially in the first half. The game also saw the match official having to use the Video Assistant Referee (VAR) monitor three times.

The first instance came in the first half when Downs was awarded a penalty that the team’s star man Themba Zwane missed after hitting the upright.

The referee Bamlak Tessema Weyesa took his time watching the VAR monitor to assess the incident himself.

The midfielder failed to utilise the goal scoring opportunity he was given as the first half ended goalless.

In the second half the home team surprised the stubborn visitors with an early goal to take the lead. Defender Brian Onyango scored what was an important goal that gave Downs that lead.

Onyango had an easy tap-in after the visitors goalkeeper Wellington Gomes couldn’t stop Lyle Lakey free kick. After that goal the visitors were forced to fight back and they did so.

The VAR was once again in action when the Angolans scored the equalising goal but it was disallowed due to the foul on Downs goalkeeper Denis Onyango.

In the 60th minute the VAR was called into action yet again after the Angolans complained that Andile Jali fouled one of their players in the box. The referee then awarded the visitors a penalty.

In the 64th minute, the captain Tiago Azulao scored the penalty to give the visitors that away goal they were seeking for.